You are here: Home / Archives for Ghost ocean pools

From the early-1950s to the late-1980s, there was an Olympic-size ocean pool at Burleigh on Queensland’s Gold Coast.

Proposals and discussions about creating a swimming pool on Burleigh’s foreshore to give locals and holidaymakers a safe swimming area.

Gold Coast personality, Jack Evans (then the lessee of the Burleigh dressing pavilion) builds Burleigh’s first swimming pool on the foreshore next to an outdoor skating rink. The pool is 50m long.

A cyclone destroys the outdoor skating rink on the Burleigh foreshore, but does not destroy the pool.

Formation of a swimming club based at the pool

The Burleigh Rock Pool was replaced by a  swimming centre within “The Beach House” complex. 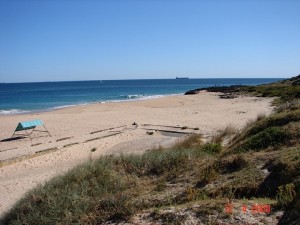 The sand-filled remains of a public saltwater pool  are visible just south of Bunbury’s Rocky Point.

END_OF_DOCUMENT_TOKEN_TO_BE_REPLACED 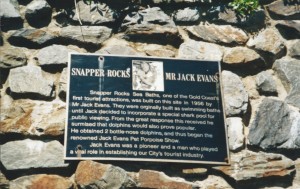 (Image from Author’s own collection)

As this plaque in the car park at Coolangatta’s Snapper Rocks says:

“Snapper Rocks Sea Baths, one of the Gold Coast’s first tourist attractions, was built on this site in 1956 by Mr Jack Evans. They were originally built as swimming baths until Jack decided to incorporate a special shark pool for public viewing. From the great response this received he surmised that dolphins would also prove popular.  He obtained 2 bottle-nose dolphins and thus began the renowned Jack Evans Pet Porpoise Show.

Jack Evans was a pioneer and a man who played a vital role in establishing our City’s tourist industry.”

It is rare and refreshing to find a memorial plaque commemorating an ocean pool that became a ghost.

On 25 November, Have you seen the old Gold Coast posted Ian Rogers’ 1965 view of the now demolished Snapper Rocks pool complex on Facebook. People commenting on that image mentioned:
• the complex expanded to include four ocean pools,
• learning to swim there,
• swimming with newly caught dolphins held in these pools before their transfer to the Jack Evan Porpoise Pool’s new home at Tweed Heads,
• doing lifesaving exams at these pools,
• relatives, who were regular swimmers at these pools,
• the Tweeds Heads public school using these pools for swimming lessons, and
• the Tweed River High School holding swimming carnivals at these pools. 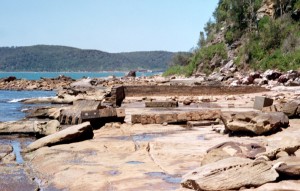 Umina Beach on the NSW Central Coast has a ghost ocean pool. It seems this pool was in use into the 1980s, when it was deemed unsafe and had its walls knocked down.

This listing of usable pools and ghost pools goes clockwise around Australia’s coast beginning with Queensland’s ocean pools. Images of some of these pools are also available in our Flickr Collection about Australia’s Ocean Pools,

Please contact All into Ocean Pools Inc if you: