You are here: Home / Archives for Portugal's ocean pools

After considering our judges’ reports on the range of entries
submitted for our 2018 Pat Skinner Award for writing about ocean
pools, our Committee agreed to immediately institute a separate
Research Award.

Prize-money for our 2018 Research Award was
provided by our major sponsor, Diverse Productions
(https://diverseproductions.biz/).

Prize-money of $500 (equal to the maximum prize-money
ever awarded to one individual for any of our
awards) for our new 2018 Research Award was
awarded to Valentin Rey for Piscines de marée six
essais, his six ground-breaking essays on the
aesthetics and architecture of the ocean pools of the
Azores and Madeira Islands. Valentin’s research on
Portugal’s Atlantic islands was undertaken as part of
his postgraduate architectural studies at a Swiss
University, the EPFL (École polytechnique fédérale
de Lausanne – see https://www.ep:.ch/en/home/)
and written in French.

Valentin described his 160-page document as ‘a
theoretical approach on architecture. It seeks to reveal
the qualities of ocean pools in terms of materiality,
resistance, time and as a constructed object strongly
related to the site where it is built.’

Kim Mettam was awarded an Honourable
Mention in our inaugural Research Award for
Explosive History behind Mettam’s Pool, his entry for
the 2018 Pat Skinner Award for writing about ocean
pools.

His account of the development of Perth’s Mettams
Pool written ‘with support from all of Frank Mettam’s
grandchildren’ had been published as a one-page
article in the Weekend West Australian of October
29-30, 2016. Kim’s entry stated ‘This beach was
largely wall to wall reef until the early 1930’s. Out of
this Grandfather created a natural swimming and
snorkelling pool and a sandy shoreline. It took over
35 years of hard work but to the family it was a
labour of love for their community’.

Our writing judges decided not to award any prize-money
for the 2018 Pat Skinner Award for writing
about ocean pools. They did however award two
Honourable Mentions.
– our member, Caroline Josephs (yes, the same
Caroline Josephs awarded prize- money for our
2018 members-only Shirley Ellis Art Award) for
Memory — Palm Beach Ocean Pool, her memoir
of the time ‘in 1947 at four and three quarter years
of age I learned to float in Palm Beach Ocean
Pool. This bodily experience began a lifetime of
love of ocean pools. I am now 75 years’, and
– Jane Downing for her story Hurly-Burly,
‘a piece of short fiction remembering the
Burleigh Heads ocean pool’ that once existed on
Queensland’s Gold Coast.

Today All into Ocean Pools Inc emailed the winners of our 2018 Sheridan Evans Award for artwork relating to ocean pools. The AU$800 prize-money was divided evenly between 4 prize-money winners – 3 from Australia and one from Portugal. Our judges awarded AU$200 to:
– Newcastle Bogey Hole by Paul Hollins (we are waiting for permission to display this image of the Bogey Hole at Newcastle, Australia),
– Before the Sun by Brydie Piaf (an image of the Merewether Ocean Baths) in Newcastle, Australia,

– Golden Edge by Carlos Resende (an image of the pool at Azenhas do Mar in Portugal).

Our judges awarded Honourable Mentions to:
– Sunrise Swimmer by Rosie Steggles (another image of Sydney’s North Curl Curl Pool), and

– Pool by Carlos Resende (another image of the pool at Azenhas do Mar in Portugal).

Our judges awarded Special Commendations to Rosie Steggles and Graham Gall, who each submitted 5 fine images of ocean pools.

All into Ocean Pools Inc congratulates all our award winners and thanks all of the award entrants and our judges (Julianne Collingridge and Barbara Smith) for their participation in the 2018 Sheridan Evans Award for artwork relating to ocean pools.

We know of pools on Portugal’s Mainland and its islands that fit our definition of an ocean pool,  but as yet we have little information about their history or their heritage significance.

Sintra – Pool at Azenhas do Mar

A magnificent seawater pool exists at the foot of a cliff on the Atlantic coast.

A famous work of art in keeping with the whole water front  designed by Alvaro Siza. Includes the famous Bosonova Tea Rooms.

(Thanks to our member, Sheridan Hopkins, for this information.)

A set of magnificent pay-to-swim saltwater pools with fixed summer and winter opening hours are located in the village of Porto Moniz, on the island of Madeira in the Atlantic Ocean west of the Mediterranean Sea. Kate Rew rates those pools among Europe’s  top 10 seawater swimming pools.

There is a sublime, Olympic-length pool  under a natural rock arch at the bottom of a steep road known as Frente de Mar do Seixal. Next to that is another pool see image below.(Thanks to our member, Sheridan Hopkins, for this information and her images.) 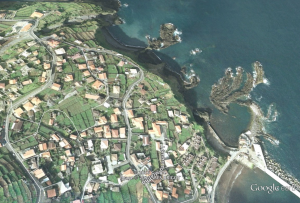 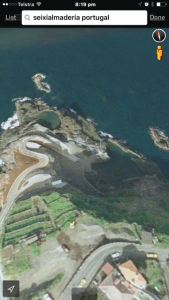 Doca do Cavacas (photographed by the late Pim Vuik)