You are here: Home / Archives for Useable ocean pools 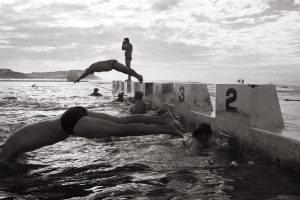 Brydie Piaf  was awarded AU$200 in prize money for entering this work Mackerels in our 2017 Sheridan Evans Award for artworks relating to ocean pools. The Australian ocean pool depicted in this image is the Merewether Ocean Baths on the New South Wales coast. As Brydie Piaf’s entry note ‘ Since 1972 the Merewether Mackerels winter swimming club have been swimming at Merewether Baths’.

You can find more fine photographs by Brydie Piaf on the Facebook Page for the Merewether Mackerels. 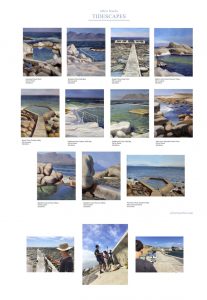 Oliver Scarlin Chennells from Stellenbosch in South Africa has received AU$300 in  prize money for entering this work Tidescapes in our 2017 Sheridan Evans Award for artworks relating to ocean pools.

Tidescapes is a composite image of a series of oil paintings Oliver made on locations around Cape Town in the summer of 2016 and in his words ‘soaking in the unique aesthetic of each pool’. To see the individual images at a better resolution, visit Oliver’s website: https://www.oliverscarlin.com/

Oliver’s entry stated that ‘each painting is oil on panel, made on location under 3 hours. Every picture has a story, and no location or day painting was like another. I engaged with people every day while painting – and often, joined them for a swim after my work was complete. It was more than an exercise in making pictures. Painting on location became an act of sharing the spaces, and engaging with the ocean and the people around me’.

About those ocean pools

Oliver’s entry also stated that ‘while the brutal simplicity of their walls against our coastline is striking enough, each site also reflects a history of segregation. Some even took on their own social identities in spite of apartheid laws. Today, some are in disrepair, but most of these pools embody something wonderfully humanistic, drawing people from all races and backgrounds to engage with our ocean.’ 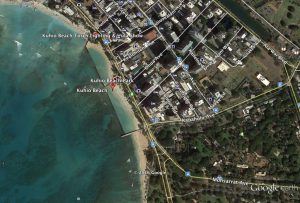 As the Google Earth image shows, Hawaii’s Waikiki Beach Pool is a large protected swimming area off Oahu’s Kuhio Beach Park. Its two nearly enclosed pools are the happy outcome of efforts to control beach erosion in the 1950s by creating the Kapahulu Groyne and the low rock walls that run perpendicular to the groyne and parallel to the beach.

Unlike the nearby and long-closed Waikiki War Memorial Natatorium, this is not a formal pool designed to cater for competitive swimming.

Other names for this pool

The ocean pools at Laguna Beach’s 1000 Steps Beach appear to have been built for private use in the 1920s.  There now appears to be some confusion about whether these pools are now on private land or public land. Once ‘secret places’ known only to local residents, the pools have been popularised by blogs and You Tube videos, such as: 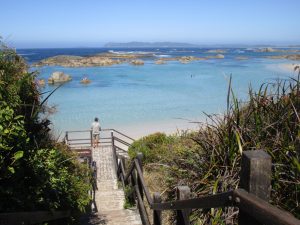 The nearest town is Denmark.

It is hard to improve on a natural wonder, but a large carpark, a nice walking track and a good set of steps makes it easy to admire and access Greens Pool. The toilet block next to the carpark is also a plus.

This pool is a well-established a tourist attraction on the south coast of Western Australia. Greens Pool offers great shelter from the full force of the Southern Ocean’s waves.

Western Australia’s Department of  Parks and Wildlife  provides some useful signs about the pool and the care its visitors should provide. 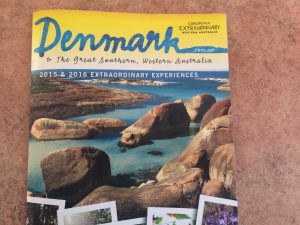 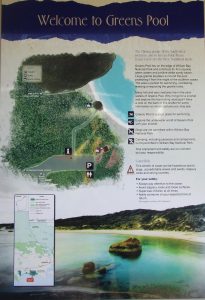 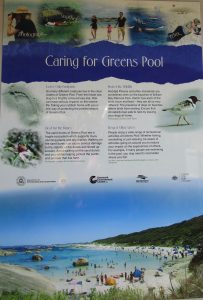