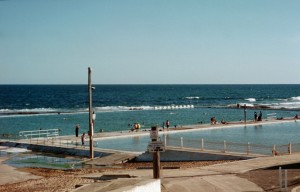 A huge pool complex lying a little to the south of the old Merewether baths on the same rock platform. A 50-metre racing area with diving blocks occupies the extreme southern end of the main pool separated by a wide promenade from the children’s pool, located near the mouth of the tunnel that ran from the beach to the Burwood Colliery. The northern seaward corner of the main pool has a distinctive pumphouse. This pool is a popular subject for photographers and other artists.

Acclaimed since the 1930s as the ‘largest of their kind in the State’, these ‘110 yards by 90 yards’ baths were ‘big enough to hold the larger swimming events’ and once hosted a range of novelties such as a water wheel.

1840s
Merewether was once part of the Burwood estate belonging to James Mitchell, who commenced coal-mining there in the 1840s.

From 1929 to 1934
A sewer outfall at Merewether beach caused pollution problems at the beach and the ocean baths used for weekly swimming competitions. Once an amplification scheme for Newcastle sewage planned to treat all sewage, screen out solids and discharge only ‘the liquefied portion’ into the ocean and so eliminate pollution at Merewether Beach, it seemed reasonable to contemplate building bigger and better ocean baths at Merewether.

1934
The NSW Department of Local Government agreed to advance a thousand pounds to Merewether Council for tools/material required for the swimming baths to be constructed under the Emergency Relief Scheme. Construction of the baths began with excavation of the Children’s Pool. Excavated stone was used on local roads.

1935
At a cost of 2,600 pounds, the new Merewether Ocean Baths, acclaimed as the ‘largest of their kind in the State’ opened as part of the Merewether Golden Jubilee celebrations in November. There was a procession in fancy dress from the Council chambers to the baths considered ‘the greatest advertisement for Merewether as a residential suburb’.

The new baths were further seaward and a little to the south of the older Merewether baths on the same rock platform. The new baths were ‘big enough to hold the larger swimming events’ and had a wide promenade separating a the main pool (110 yards long and 55 yards wide) from the children’s pool (110 yards long and 35 yards wide) on its landward side.

The NSW government had paid  3,500 pounds for relief work on the baths and excavation of the baths yielded some 6,000 to 7,000 cubic yards of stone valued at 2,500 pounds. The new baths became central to the life of the community and prompted more people from the Lower Hunter district to visit Merewether and Merewether Council sought a further government loan to fund construction of dressing-sheds at the baths.

1936
Stone from the baths was still being used for road construction and excavation began for new dressing-sheds at the baths.  With all age-groups recognising a need for pool toys, recreational equipment added to the baths for the swimming season included diving board, pontoons, slippery dip, large wheel and horizontal cylinder.

1937
Parts of the floor of the children’s pool and the main pool were concreted and the baths integrated into the beach promenade. The Merewether Ocean Baths acquired a high diving tower and a pump. The pool was deepened under the high diving tower.  By September, the baths site was no longer an economically viable source of stone for road-building.  Novelties were again placed in the pool for the summer swimming season.

1938
The Merewether Ladies Swimming Club and the Merewether surf club held a combined annual dance and presentation of trophies.

1939
Improvement to the Merewether Baths included deepening the pool below the springboards and amusement floats, improving the drainage and excavating a new pumphouse with a pump that would allow the baths to be filled and emptied daily ‘to remove grounds for criticism’. The pool praised for its powerful pump, ‘gently sloping bottom’ and its pool toys (shoots, slides, pontoons and spinning wheels),’ brilliant lighting’  and gaily coloured picnic alcoves that would long feature in tourist literature such as Newcastle’s Beaches: the Most Beautiful on the Coast.

Closure of the Baths created fears for the safety of children ‘forced to use the surf with its attendant dangers rather than swimming in the safety of the baths,’ but the Baths re-opened for Christmas holidays. After the outbreak of World War II, older surf club members joined the services.

1940s
Merewether beach was fortified with barbed wire and tank traps and the army occupied the caretaker’s flat in the pavilion. People going to the beach had to pass a sentry and receive permission.

1948
The Merewether surf club’s Rescue and Resuscitation (R&R) team used to alternate training at the Baths with shooting the waves from 5.30am to 7am, then head home for breakfast and off to work.

1968
A squad from the Merewether surf club began swimming at the Baths during winter.

1972
The Merewether Mackerels winter swimming club formed and initially swam at the old Merewether Baths ‘until such time as the use of the Merewether Ocean Baths could be granted’. The club colours were blue and gold and the club motto was ‘Fun and fitness’.

1974
On 25 May, a cyclone damaged the Merewether Ocean Baths.

1976
The Mackerels (assisted by the Newcastle Council, the Workers Club and the local Police) conducted the first Australian Winter Swimming Championship held outside Sydney, an event that attracted around 500 visitors from all over Australia to the Merewether Ocean Baths.

1998
There was a near-drowning at Merewether Ocean Baths during the few October weeks, when there was no inspector on duty.

1999
There were requests for Council to provide a lifeguard all year round or at least from September to April. Locals considered that the Merewether Ocean Baths were better patronised than ‘the ones in town’ and used by a lot of school groups, children and elderly people. On October 10, there were around 2,000 children and adults cooling off at the Baths.

2001
Storm damage at the Baths included washing one of the diving blocks into the Baths.

2013
The City of Newcastle RSL pipe band led the Merewether Mackerels to the baths for first of their winter swims.

2014
With their home pool closed for repairs, the Merewether Mackerels began their season with a swim in the sea.

2016
The Merewether Mackerels are hosting the National Championships of the Winter Swimming Association of Australia.

This website is owned by All into Ocean Pools Inc,  a not-for-profit, volunteer community … END_OF_DOCUMENT_TOKEN_TO_BE_REPLACED