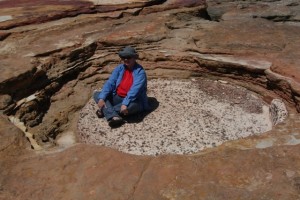 A small private bathing pool that became a tourist attraction and then a ghost pool.

1880s
Broome was developing as a port for a pearling industry focused on pearl shell.

By 1889, an undersea telegraph cable that made landfall at Cable Beach linked Broome to Singapore.

1890s-1910
After 6 years in the Western Australian police, Patrick Percy had become the licensee of a hotel for a few years and then become involved in pearling, operating 6 pearling luggers  by 1903-1904. Patrick and his wife Anastasia were living on the schooner Gwendoline in 1909-1910.

Gantheaume Point’s first light house was operating in 1906 and  it was replaced by a newer automated light house by 1917.

1920s
In 1922, Anastasia and Patrick Percy bought the cottage once reserved for the keeper of the lighthouse at Gantheaume Point. Patrick arranged for his workmen to develop a small bathing pool so that Anastasia, who  had severe arthritis,  could bathe at high tide in the warm waters of the Indian Ocean. The pool had stone walls and a concreted bottom.

In 1923, Patrick Percy was appointed a Justice of the Peace for the Broome Magisterial District. In 1924, Anastasia Percy was recorded as the owner of the 10 ton schooner Frosty.

1931
Patrick died in 1931 as a widower with no children and left an estate valued at 8,000 pounds and no will. After his death, it was discovered that the man known in Broome as Patrick Percy had left  Ireland as Patrick Sullivan and his estranged mother back in Ireland was judged to be entitled to the first thousand pounds from his estate and half of  the residue.

1940s
Japanese planes bombed Broome in 1942 and 1943 and both pearling industry and the population of Broome had declined markedly by the end of World War II.

Author and photographer Stuart Gore was photographed  in Anastasia’s Pool in 1948.

1950s
Stuart Gore’s 1956 book Overlanding with Annabel  (which described the journey he and his wife made from Perth to Darwin and back in an old car they called Annabel) had an image of the author in Anastasia’s Pool as its frontispiece.

Buttons were being made from plastics rather than mother of pearl, but cultured pearls were helping to revive Broome’s pearling industry.

2014 to present
Wild weather and waves  in 2014 severely damaged Anastasia’s Pool. Its walls were broken and there was no longer any concrete in the bottom of the pool. The Shire of Broome decided the pool  could not be repaired.

This website is owned by All into Ocean Pools Inc,  a not-for-profit, volunteer community … END_OF_DOCUMENT_TOKEN_TO_BE_REPLACED