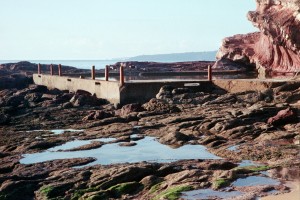 Sited at the southern end of Aslings Beach at the foot of the headland with a north-easterly aspect, this man-made pool is cut into the beautiful red sandstone and filled by the tides.

Historical notes
The Yuin people were the first people to live around Twofold Bay.

1904
The Eden Progress Society debated the need for a swimming pool at the chosen site of Ross Bay. Huge sharks in Twofold Bay alarmed swimmers and fishermen.

1960s and 1970s
Pupils at St Joseph’s Catholic primary school were swimming  ‘at the old rock pool’ in Eden.

2002
The pool was handy for guests at the tourist park located on Aslings Beach.

This website is owned by All into Ocean Pools Inc,  a not-for-profit, volunteer community … END_OF_DOCUMENT_TOKEN_TO_BE_REPLACED