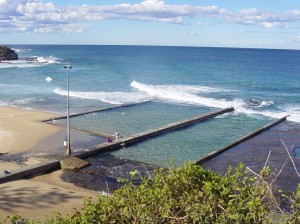 The double pool near the surf club attracts many regular swimmers who ignore the earlier pool a little to the south.
photographers have created memorable images of this pool, which appeared on early twentieth century postcards and still appears on postcards and greeting cards.

Historical notes
Early 1900s
People came by train from Sydney to stay at Austinmer’s guest-houses and enjoy its surf beach.

Austinmer consisted of only about 20 houses. The first so-called ‘butterbox’  (later known as the Outlook guest-house) was built soon after a subdivision.

1907
Austinmer’s railway platform was lengthened to meet the growing patronage. New buildings rapidly appeared as the town which ‘satisfies the modern craze for surf bathing. Austinmer’s destiny to become ‘the Brighton of New South Wales’ was publicly acknowledged by the Sydney press.

1914
Conceived as a tourist attraction that would boost the local land sales and economy, the ocean baths at Austinmer Beach were built through the Austinmer Progress Association with funds subscribed by residents, house-owners and land-owners and visitors. Until 1914, the Austinmer surf club did not meet as a body separate from the progress association.

Bulli Shire Council was to contribute pound for pound with the Progress Association. While contractors worked on the baths, the dressing-sheds were built by working bees.   To remove the need for ‘some of our visitors to return to their cottages in their costumes’ or at least ‘make such behaviour inexcusable’, the dressing-sheds each had a capacity of 50, a shower and concrete foot bath at the entrance and displayed copies of the surfing regulation.

Some of the excavated stone was used near the kiosk, where the new ladies dressing-shed was to be built. Bulli Shire Council used the remaining stone for road-building. Management of the North Bulli colliery arranged a valve for the pool.

S. J. Vidler, the president of the Bulli Shire, opened the baths on Easter Monday 1914. The opening program included girls and boys swimming, diving and novelty events such as a cork scramble. The winner of the boys’ swimming event had learnt to swim in the Austinmer pool during its construction.   The Baths served all their intended purposes, with so many 1914 visitors  buying land at Austinmer that there was a need to release more.

1917
Baths constructed on the rocks near the southern headland replaced the baths opened in 1914. A seawall was erected and the creek piped from the centre of the beach to the southern headland.  1918  Austinmer’s two large rock pools were the subject of a painting by Alfred Coffey.

1919
New baths near the Austinmer surf beach were proposed. After a Sydney man donated 50 pounds, the Progress Association anticipated being able to quickly get on with the work. Work began in February 1919 with the new baths placed near the old baths and expected to be ‘second to none … on the South coast’ when completed.  1923  Austinmer’s two bathing pools were proving popular with visitors.

1927
A letter to the Illawarra Mercury from ‘Pro Bon Publico’ attributed the popularity of Austinmer as a tourist resort primarily to Austinmer’s beach and swimming pools.

1930
A large baths (75 yards by 35 yards) was under construction at Austinmer and expected to be ‘second to none in the state’ on completion around Eight Hour Day. The baths used fill from the Excelsior Colliery. New dressing-sheds were open by November. Councillor Clowes strongly supported the baths work. The bath, equipped with lights for night swimming, were finally opened on 20 December by Sir Philip Game, the State Governor. The guard of honour included members of the 3rd Battalion, boy scouts, girl guides, south coast surf clubs. The Hurstville band provided music.

1933
Bulli Shire Council approved the Austinmer Local Committee’s suggestion that the paid lifesaver appointed for eight weeks from 16 December be made responsible for tidying up the beach and supervision at the Baths.

1938
The community was hoping to build a second rock baths. Bulli Shire built a new kiosk to replace the earlier one and approved work by a contractor to improve the walls of the Austinmer rock baths. By December 1938, Bulli Shire was planning to open Olympic baths at Austinmer in three months.

Following complaints that bathers were going up to the Austinmer shops in ‘very scanty bathing attire’, Bulli Council resolved to ban bathers from walking the streets in bathing costumes and ask police to stop the practice.

1939
By December, Bulli Council had taken over construction of the Austinmer Baths from the contractor.

1940
The Women’s Christian Temperance Union at Austinmer, the Methodist Ladies Church Aid (Austinmer) and Reverend R. Brown of Austinmer complained that beach attire was being worn in the streets of Austinmer and that the Bulli Shire regulation stipulating ‘persons are not allowed to leave the beach clad only in trunks, shorts or bathing costume’ was more commonly breached than observed.

1943
The Annual Boy Scouts District Swimming carnival, which attracted scout troops from Austinmer to Nowra, was planned for the Austinmer Baths.

1945
The swimming club formed at Austinmer boasted it had outstanding girl swimmers. The club soon built a large membership and was asking to have ring bolts added to the baths to anchor lane ropes, two bolts added at the 22 yards mark and to have the springboard be fastened more securely. The club also offered to remove dangerous barnacles and to clean the baths, although it could not do this without inconvenience to the public. The Austinmer local committee wanted floodlights for night swimming, as well as lights for the kiosk.  Sand built up in the new Austinmer baths, which ‘did not clean themselves like the old baths’.

According to the Bulli Shire Engineer, the baths which had never been cleaned out since their construction then held at least a thousand cubic yards of sand. The cost of removing that sand was estimated at 75 pounds.

1946
The Austinmer swimming club had 140 members, had taught many young children to swim and was planning to hold club championships with trophies donated by the Austinmer Surf Club. The swimming club’s Easter carnival attracted entries from Wollongong, Coalcliff, Bulli and Thirroul as well as Austinmer.

1963
The leaking swimming pool was repaired.

1989
Former members of men-only swimming clubs formed an unofficial swimming club, the Austinmer FYBROS (Freeze Your Balls/Boobs Off) to swim Saturday and Sunday and accept men, women and children as members.

1999
Wollongong City Council claimed it had replaced a ladder at the pool within two hours of it being reported missing.

2001
An Austinmer B&B (bed and breakfast establishment), originally built as a guest-house where travellers could change horses, still promoted the baths as a visitor attraction.   Scuba-divers, surf club, the local swimming club and pool regulars joined the search for a missing wedding ring on the bottom of the pool. When Wollongong City Council drained the pool to clean out the sand, friends of the ring’s owner sifted through the sand until a fossicker with a metal detector found the ring.

2002
Beachgoers noticed a large goose loitering on the rock platform at the south side of the pool, occasionally foraging among the seaweed on the beach or inspecting swimmers walking down to the pool. Both WIRES and the RSPCA investigated the goose and decided that there was no reason to remove a healthy domestic goose from the pool area.

The pool’s unofficial morning swimming group almost split when some people started using the hot showers at the Austinmer surf club. Regular morning swimmers included teachers, foremen, housewives, labourers, lawyers and doctors. The longest-serving member of the group had swum the pool every morning for the past 40 years and another member was soon due for the club so-called  long-service medal, namely  ‘a bottle of Chivas Regal’.

Austinmer’s ocean pool, its family-friendly picnic area, its community and environmental education programs and beach access for the disabled and elderly contributed to Austinmer winning the title of the cleanest and friendliest beach in NSW.  Despite Council’s denials, the FYBROS members believed Austinmer’s southern pool had a serious leak at low tide and that circulation of water in the northern pool had been impeded since Wollongong City Council built up the western wall.

2003
Austinmer became a little bit harder for Sydney visitors to reach after the contentious closure of a stretch of the coast road between Coalcliff and Clifton forced Sydneysiders visiting Austinmer and neighbouring Thirroul and Scarborough had to head south on the F6 freeway and descend to the coast via the Bulli Pass.

This website is owned by All into Ocean Pools Inc,  a not-for-profit, volunteer community … END_OF_DOCUMENT_TOKEN_TO_BE_REPLACED