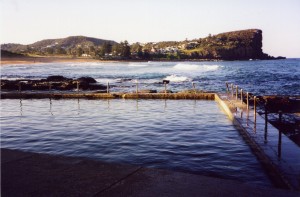 A 25-metre ocean pool, where waves slap over the wall, plus a rock pool for toddlers. Located at the southern end of Avalon Beach. A wire fence has been installed at the base of the cliff to trap falling rocks. Access from carpark off Barrenjoey Road and it’s Pay & Display parking here. This pool is a popular subject for photographers.

1800-1905
An 1837 land grant to Father John Joseph Therry covered almost the entire peninsula from Newport to Whale Beach, including Avalon and Bilgola beaches. After Father Therry’s death, the Jesuit order sold these lands to finance the construction of a new Catholic cathedral for Sydney on the site where St Mary’s Cathedral had burned down.

1921
Developer Arthur J. Small chose the name Avalon when subdividing the area. After Avalon’s sand dune was destabilised and mined, the freshwater swamp was filled, creating a camping ground used until the 1960s.

1923
There were only ten houses in Avalon and some of those were only used at weekends.

Late 1920s
The Avalon Pool was deepened by Warringah Council. Rocks were blown up to deepen the swimming area and walls were constructed. There was no path to the pool and no club house and the young Norfolk Island pines were still protected by tree guards.

1997
Registration for junior activities for the Avalon surf club included a timed pool swim for proficiency at the Avalon Beach Pool.

A couple of episodes of the popular US television series Baywatch were filmed at Avalon. The Baywatch crew even blew up a yacht off the rock pool without warning the community or stating such a plan in their filming application. Swimmers were asked to get out of the rock pool because Baywatch was filming a rescue scene by the pool. A woman in her eighties, who was hurrying out of the pool, cut her arm on the side of the pool and was given first aid by the TV crew.   The proposal to use Avalon as the location for the whole Baywatch series (filming seven months a year for six years) caused turmoil. Many of the local residents were not keen to attract any more weekend visitors to their village and beach. Among other things, filming would have restricted access to the beach and the rock pool.   An Anti-Baywatch Action group, that attracted support from both surfies and business people, started collecting signatures for a petition. Following strong negative sentiments expressed at a meeting called by Council, plans for further filming at Avalon were abandoned.

2001
An off-duty policeman rescued and resuscitated a woman washed into the sea and smashed against rocks while sunbaking near the rock pool.

This website is owned by All into Ocean Pools Inc,  a not-for-profit, volunteer community … END_OF_DOCUMENT_TOKEN_TO_BE_REPLACED