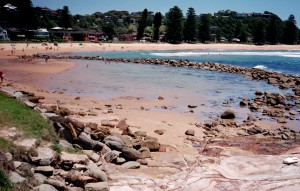 Sited at the southern end of Avoca Beach, this is a ring-of-rocks children’s pool. There is a dangerous rip at the south end of the beach near the rocks and lifesavers recommend children swim between the flags or in the rock pool under parental supervision. This pool is  a popular subject for photographers and other artists.

1908
The building of the first bridge across Avoca Lake improved public access to Avoca Beach, then called Moore’s Beach.

From around 1911
Well-to-do people travelled quite long distances to stay at the elite Avoca Beach Guest House, which was both the social centre of the village, and a great venue for fund-raising events.

1920s and 1930s
The drowning of two local girls at Avoca Beach in 1928 triggered the formation of a surf club in 1929. Guest-house visitors generously supported the surf club.

Around 1929-30, Avoca Beach acquired its first shop and post office.

1956
The pool was an accepted part of the beach landscape complementing the surf beach. Council offered to supply around eight bags of cement for the Progress Association to use in repairs of ‘the children’s rock pool’ at the southern end of the Beach.  1960s  After several gruesome drownings at the beach, locals decided the Gosford pool some 10 miles distant was not meeting the learn-to-swim needs of the 125 children at the local school, the training needs of the Avoca Beach surf club or the summer population (including campers) estimated at 11,000. The ocean baths at The Entrance were 20 miles away.   The Avoca Beach Progress Association spearheaded a movement to enlarge and improve the existing rock pool to meet the community’s evident needs and enhance the beauty of the southern end of the beach.

1964
The Progress Association wrote to Mr P. D. Hill, the NSW Minister for Local Government, about ‘the lack of safe bathing along the whole of this coastal area’. The coastline between the Hawkesbury River and The Entrance was said to have a ‘lamentable lack’ of facilities where people could learn to swim or where swimmers could train.   Council had already approved the construction of a pool in principle and a public meeting was held at the Surf Club pavilion to discuss the pool proposal. There was support from the Bowling Club, the CWA, Chamber of Commerce, Parents and Citizen’s Committee and the Surf club.

1968
The pool project committee sought funding from Alderman P. D. Hill, NSW Deputy Premier and Minister for Local Government, and learned that Gosford Shire Council could seek a subsidy from the Department of Public Works for the construction of an Olympic pool at Avoca Beach.  A few people worried that the pool project interfered with ‘the natural unspoiled beauty of the area’ and doubted whether ‘pressed concrete could withstand the heavy seas at times very rough’. The rock pool offered a good protected fishing spot when the seas were up and Avoca Beach Angling Club worried that work on the pool would impair the fishing, which is ‘of prime importance to visitors’.  The Avoca Beach surf club, worried that ‘the number of rescues this year appear to have increased since the alteration of the pool’, suggested seeking advice from the CSIRO on whether alterations to the rock structure would affect the currents. The CSIRO referred the matter to the University of New South Wales Water Research Laboratory at Manly Vale.  1

1969
The Avoca Beach Chamber of Commerce withdrew its donation ‘due to the lack of interest by the general public and abandonment of the Rock Swimming Pool project’.

1975
The Progress Association asked Council to have the children’s pool cleaned out by the October holiday weekend. ‘Most grand-parents’ present at a meeting agreed that the pool was in an unsatisfactory state and requested low-tide inspection with a representative of the Shire Engineer.

1978
Water samples taken at the rock pool gave high pollution readings, even at one point equivalent to raw sewage, so the Department of Health erected a sign at the pool to warn swimmers of pollution from septic systems. The Health Department prosecuted about half a dozen people, booked about 27 people for discharging effluent into gutters and asked nearby householders to attend to their drainage problems.   When the Progress Association asked Council to extend the stormwater pipe so it emptied beyond the children’s pool, Council advised that it had no funds available and that the problem ‘will be alleviated by sewerage reticulation scheduled for 1981’.

1980
The Progress Association asked the Health Commission to check pollution levels at the rock pool to see if the pollution warning sign could be removed.

1988
Gosford Council assessed the Avoca Beach rock pool as having high usage, being shallow, well-located and ideal for small children and as being in a fair condition, even though its rocks had to be re-arranged after high seas.

1991
The Association was concerned that the ‘Babies rock pool’ was silting up.

1994
A storm water drain was still emptying into the rock pool.

1995
When the Avoca surf club and life guards asked Council engineers to assess the feasibility of erecting a full-size pool within the rock pool, a 248-signature petition opposing the development of the Olympic pool convinced Council to leave the pool alone.   Council rerouted the stormwater drain so it no longer emptied into the rock pool and removed some sand and rocks from the pool, as well as forming a Council Beach Liaison Committee with three Avoca Beach representatives, one from the general community, one from the Progress Association and one from the surf club.

1998
Two men fishing off the rocks south of the rock pool were hit by a huge wave and washed into the water. Lifesavers pulled both men from the water and began resuscitation on the unconscious man, who was dead on arrival at Gosford Hospital. The other man was treated for shock.

2003
A five-bedroom townhouse at ‘The  Rock Pool” with wide views down to the Avoca Pool was on the market  for $1.5 million.

This website is owned by All into Ocean Pools Inc,  a not-for-profit, volunteer community … END_OF_DOCUMENT_TOKEN_TO_BE_REPLACED