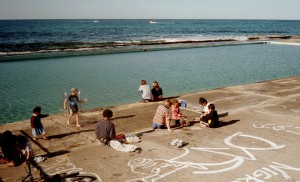 One of the youngest of the Illawarra ocean pools – a 1960s ocean pool begun by voluntary labour.

From the 1850s, the Bellambi Harbour shipped coal to Sydney, Melbourne, Adelaide and later China. Despite the harbour’s  use for shipping, there was little development of Bellambi village until the 1940s.

1947
The Northern Illawarra Council was amalgamated with other Illawarra councils to form the City of Greater Wollongong.

1958
Funding was sought for rock baths at Bellambi.

1960
Photographs show the pool being built by community effort and the Bellambi jetty in the background.

1961
The pool was still being developed.

1964
A doorknock was held to raise the funds still needed to finish the pool.

1965
The pool officially opened, making Bellambi the youngest ocean pool in the Illawarra.

Mid-1970s
The prime waterfront location adjacent to Bellambi Beach was developed as a public housing suburb.

1980
The old boat ramp at Bellambi was upgraded to a four-lane ramp with parking for about 100 rigs.

1999
The sewer outfall at Bellambi inspired a ‘Paddle against Poo’ from the Bellambi Point sewage treatment works to Wollongong’s North Beach and onto South Beach.

2002
The NSW EPA warned swimmers to stay out of the surf and sea pools until the weather cleared, as during the recent heavy February downpours, the sewage treatment plants at Bellambi released partially treated sewage into the ocean.

This website is owned by All into Ocean Pools Inc,  a not-for-profit, volunteer community … END_OF_DOCUMENT_TOKEN_TO_BE_REPLACED