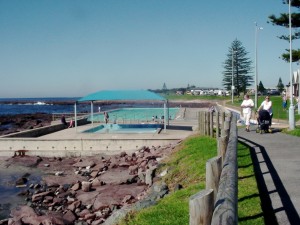 Little Park, end of Addison Street. Adult pool and a kiddie pool with a shade shelter, mural, modern change sheds/amenities. Close to Shellharbour’s caravan park. Shellharbour’s ocean pool has attracted visitors since the 1890s. Some memorable images of this pool resulted from ‘Race around Shellharbour’ photographic competition in 2000.

Historical notes
Middens at Bass Point indicate the Wadi Wadi Aboriginal people have lived in the area for at least 17,000 years.

1800-1890
Shellharbour is one of the oldest colonial settlements on the NSW South Coast.   After the Clifton to Kiama railway opened in 1887 and the Bomaderry to Sydney railway opened in 1890, Shellharbour’s shipping trade disappeared.  Albion Park, which was located on the rail line, became the centre of the district’s butter industry and the centre of the municipality rather than Shellharbour (where the nearest railway station was some miles from the town).

1894
A progress association formed to develop Shellharbour and focused on the development of a bathing pool and lamps to light the streets. The new South Coast railway had become a tourist line and Shellharbour began to dream of itself as ‘the future Brighton’ and ‘one of the most important watering places on the NSW south coast’.   In February, tenders were called for the ‘excavation of a bath’. In May, the Shellharbour Progress Association was asking the NSW Minister for Works to send an official to inspect the baths site as soon as the NSW Minister for Lands authorised construction of the baths. By December, the Shellharbour Progress Association was having difficulty getting a grant for the baths and considering construction of a temporary dressing-shed at ‘one of the old bathing places for use by local and Sydney visitors until the new baths are completed’.

1895
The original pool was 60 feet by 20 feet with a maximum depth of 5 feet. Bathing regulations allocated the ladies  two hours of bathing in the morning and a further two hours in the afternoon from 3pm to 5pm, while men could bathe before 7am or after 5pm. During other hours, a system of flags was used to indicate which sex could bathe. The baths drew tourists and were soon taxed to their capacity in the summer months.

1905
The Illawarra Steam Navigation Company’s handbook, reported that Shellharbour, ‘The Sanatorium of the South’, had two ‘free and conveniently situated public baths replenished with fresh sea water every tide’.

1910
Tourist guides praised Shellharbour’s ‘quiet beauty’ and ‘beaches with choice shells’ and noted that ‘baths for adults’ were provided away from the harbour beach.

1929 to 1932
Shellharbour Council continued its debate about a shark-proof net for the harbour.

1933
Shellharbour Council was seeking a grant of 200 pounds from the Unemployment Relief Council for expenditure on swimming baths.

1935
Eric Spooner, the NSW Minister of Public Works and Local Government, rejected the shark net idea and suggested new baths at the site of the old baths would be more suitable and much cheaper. The Mayor pointed out that Shellharbour had experienced quarrymen and skilled concreters and the Minister offered a grant of 200 pounds to cover the cost of the necessary materials. The likely site was ‘an extension of the present baths practically opposite the public tennis courts in the Shellharbour reserve’.

1936
There was a movement to site baths on the other side of the harbour, as Shellharbour’s ‘principal bathing place at present was by no means shark proof nor of the same high standard as the town’s other visitor amenities and attractions’.   Departmental officers advised Shellharbour Council to increase the planned baths to the standard size of 150 feet by 50 feet. The NSW government offered a grant of 1,535 pounds and Council had to find 300 pounds for material. The Mayor proposed seeking a loan, as the baths would be ‘equally beneficial’ to Shellharbour and Albion Park.

1937
Work on the new Shellharbour Baths continued under the supervision of Central Illawarra Shire. The design of the springboard was altered and surplus concrete was used on the shallow end of the pool floor. By late March, the new Shellharbour Baths had cost 814 pounds. The Town Clerk considered this satisfactory and stated that the Shellharbour Baths would suit their purpose ‘just as well as the new ones at Port Kembla, which would never be as popular because the water always had to be pumped in and out’. That Easter, Shellharbour was well patronised by campers and children and adults used the Baths, which were still under construction.

1938
By February, the Shellharbour Baths had cost over 200 pounds more than estimated. A pump had to be purchased to empty the baths and clean them of seaweed. Shellharbour Council sought assistance from the NSW Minister for Works about concreting the floor of the baths and a holiday-maker from Cremorne suggested steps be built to the Baths.

1939
Shellharbour’s camping ground and Baths were well patronised in January and the Baths were considered a ‘wonderful asset both for tourists and local residents’ enjoyment’.

1944
The Shellharbour Progress Association asked Council to clean and lime the baths for the summer season and suggested that filling in the Baths to the level of the valve would make cleaning possible. Camping numbers in January and over Easter 1944 were higher than for the past two years.  1959 The swimming pool appears in photographs of Shellharbour as a tourist resort.

1993
Shellharbour was not a patrolled beach, had a safety rating of 3 and was considered a lovely spot for a picnic but not for bathing, except in the rock pool.  1994 This Olympic pool was refurbished and renamed to honour local Olympian Beverley Whitfield.

1996
Shellharbour Council commissioned a review of its aquatic facilities.

1997
Shellharbour Council consulted the community over the future of its ocean pool and its non-tidal inground pools at Oak Flats, Warilla and Albion Park. Options were set out in a draft long-term plan with options for rationalising existing pools to fund the construction of a major new aquatic centre.

2000
A mid-week visitor concerned about weedy water in the Shellharbour Pool learned that the pool cleaner was also the grave-digger and sometimes had a rather large workload on the day scheduled for cleaning the ocean pool.

2002
The NSW EPA warned Illawarra swimmers to stay out of the surf and sea pools until the weather cleared as during the recent heavy February downpours, the sewage treatment plant at Shellharbour had released partially treated sewage into the ocean.

2003
Mayor of Shellharbour, Joan Vinton, defended her Council’s decision to offer free swimming in unheated pools at Albion Park and Warilla and in the rock pool at Shellharbour as enabling ‘all children to fully enjoy pools regardless of financial status’.

2004
The Shellharbour ocean pool was patrolled from 9.30am to 5.30pm over the school holidays.

This website is owned by All into Ocean Pools Inc,  a not-for-profit, volunteer community … END_OF_DOCUMENT_TOKEN_TO_BE_REPLACED