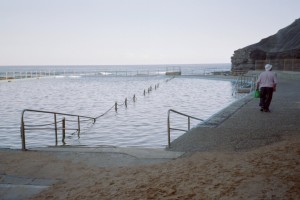 (Undated image from author’s own collection.)

Located at the southern end of Bilgola Beach. Pittwater Council stabilised the bluff erosion, so falling rocks are now less of a worry at these baths with their kiddie pool and chains. Access from the carpark area off The Serpentine. It’s Pay & Display parking here.

1800-1905
An 1837 land grant to Father John Joseph Therry covered almost the entire peninsula from Newport to Whale Beach, including Avalon and Bilgola beaches. After his death, the Jesuit order sold these lands to finance the construction of a new Catholic cathedral for Sydney on the site of the burned-down St Mary’s cathedral.

1960s
The Bilgola Baths were constructed by contractors. The pool is subdivided by post-and-chain fencing into a main pool 50 metres by 15 metres and a wading pool 50 metres by 5 metres. The headland protects the pool and after building the pool, Council built high fences to stop rocks falling into the pool zone. A wave deflector built into the north wall draws water into a scupper and ensures a constant water level.  The Avalon-Bilgola Swimming Club formed.

1992
Pittwater council was formed to administer what had been the northern part of Warringah Shire.

1996
Pittwater Council officially opened the access ramp and new steps at Bilgola rock pool to mark Ability Day. The new facilities were designed after extensive research and in co-operation with the Council’s access committee to give visitors with disabilities much greater access to the water. Pittwater Council gave $415,000 toward the cost, with the Department of Sport and Recreation providing the remaining funds.

1997
The Avalon-Bilgola Swimming Club started its season at the Bilgola rock pool on October 18 with handicap races for all ages and standards.  2003 The NSW Department of Sport and Recreation had nine morning swimming lessons running at the southern end of the Bilgola Rock Pool from January 20.  The possibility of ‘churning laps’ in the Bilgola rock baths is seen as one of the advantages of living in a $2 million four-bedroom 1960s house at Bilgola.

2007
The Bilgola Rock Baths are praised as ‘one of our best pools’ in the Sydney Morning Herald’s the (Sydney) magazine. Its appeal built on its panoramic cliff and ocean views, the potential presence of dolphins beyond the pool walls and the sense of this well-used pool as a secret place, protected by a narrow access road and limited parking. There was praise for the condition of pool and the facilities. which include changing rooms, showers and a cafe

This website is owned by All into Ocean Pools Inc,  a not-for-profit, volunteer community … END_OF_DOCUMENT_TOKEN_TO_BE_REPLACED