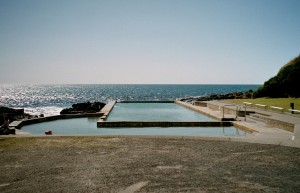 A main pool plus a children’s pool at the southern end of Black Head Beach near the Black Head Surf Life Saving Club and Black Head village, one of the four settlements that make up Hallidays Point. While entry to this combination children’s pool and training pool is pool is free, but the Black Head Pool Maintenance Committee accepts donations. This ocean pool developed during World War II to meet the needs of life savers, holiday makers and weekend beachgoers is associated with both men’s and women’s surf clubs.

1900-1915
People from Taree, Wingham and Nabiac holidayed, fished and surfed at Black Head Beach. By 1915, so many people were surfing there, that a home-made surf reel was placed on Black Head Beach.

1920s
The older Norfolk Pines along the beachfront were planted. In 1924, the Black Head surf club formed to provide safety for the surfers, swimmers and families at Black Head Beach. Black Head’s shark tower was erected with the help of a team of bullocks.

1935
When the Black Head Surf Life Saving Club complained about the condition of the creek for bathers, the Manning Shire Council stated it had ‘no funds to experiment in attempting to improve the present position’.

1937
The Manning Shire engineer submitted three tentative schemes for a rock pool at Black Head to the NSW government.

1938
The NSW Minister for Works and Local Government offered a maximum of 50% assistance with the proposed rock pool at Black Head. Manning Shire informed Black Head surf club that the Shire Engineer would prepare plans and specifications for a pool to cost no more than 500 pounds.

1939
After Manning Shire had adopted its engineer’s plans for the rock pool, the NSW Department of Works and Local Government asked for amendments. Council stood by its plan and asked the Department to make a further inspection of the site. By November, the Manning Shire submitted revised plans which met the Department’s suggestions, but kept the original length of 100 feet and a width of 30 feet.

1940
In July, the plans for the pool were still under review. In August, Mr M. Milligan’s tender was accepted for the construction of a pool 100 feet by 30 feet that would be three foot six inches at its shallowest, have  a maximum depth of six foot and a separate pool for young children.

By October, excavation was practically complete and concreting of the walls had commenced, Black Head Surf Life Saving Club organised the program for the pool’s opening carnival on Boxing Day. Carnival takings based on charges of one shilling per head for persons over 14 were to be split between the Club and the Council. The carnival to open the ‘not quite complete’ pool attracted competitors from the Black Head, Taree Old Bar and Tuncurry Surf Life Saving Clubs, as well as boys and girls. Afternoon tea was provided at the Black Head Ladies’ Surf Club. Councillor Milligan, the President of the Manning Shire, performed the opening ceremony. Except on special days, there would be no charges to use ‘one of the best baths on the coast’.

1941
The pool was proving a great boon to Black Head’s visitors. The Manning Shire Engineer was instructed to concrete the entire bottom of the baths and Manning Shire asked Black Head Surf Life Saving club for a further contribution to the pool. It was also popular with schools. The Wallamba Parents & Citizens Association used the pool for a swimming carnival.

1945
The surf club and other volunteers modified and cleaned the pool and its surrounds.  In the last years of the war, the pool had functioned more as a lobster pen, than as a swimming space.

1946
The younger Norfolk Pines along the beachfront were planted.

1950s
The pool hosted swimming carnivals. The Black Head surf club website shows activity at the pool in these years. The surf club appointed a resident of Black Head to keep the baths clean and made arrangements about a ladder and a railing for the pool.

1960s
Pollution from septic systems meant the Black Head lagoon was no longer a safe or a pleasant swimming place for children.

1988
A group of volunteers known as ‘Dad’s Army’ began to clean and maintain the pool. The pool was regularly closed and emptied for cleaning.

2004
A new Hallidays Point development strategy acknowledged the Black Head pool and the Black Head surf club’s clubhouse aa among the areas’s most loved facilities and strategy proposed that they be maintained and enhanced by remedial work and provision of shade for the pool, extra parking places, bike racks and a link to a cycleway.

2005 to present
Greater Taree Council reconstructed the wall between the main pool and the wading pool and recapped the pool walls.

As part of the community effort to raise the estimated  $30,000 to $50,000 needed for repairs to the pool, the Hallidays Point Tidy Towns group published and marketed a booklet of photos of the pool and a 6am to 6pm ‘Black Head rock pool Lap-a-thon’ was staged in March 2006. Lap-a-thonners ranged from  a two-year old child to a man in his late eighties and some lap-a-thonners swam 100 laps. The lap-a-thon raised nearly $5,000 for pool renovations.

This website is owned by All into Ocean Pools Inc,  a not-for-profit, volunteer community … END_OF_DOCUMENT_TOKEN_TO_BE_REPLACED