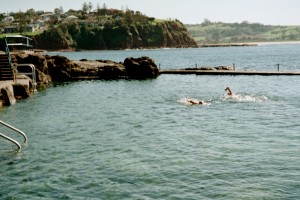 South of the harbour, not far from Kiama’s famous Blow Hole, lighthouse and tourist park. A popular bathing place from the 1880s and once a men-only pool complementing the Ladies Baths at Pheasant Point on the opposite side of the harbour. Images of this pool still appear on postcards of Kiama.

Historical notes
Up to 1819
Aboriginal occupation of the Kiama area was largely undisturbed until NSW Surveyor-General John Oxley’s 1819 report to Governor Macquarie regarding the fertile soil and dense forests in the Kiama region prompted European settlement.

1820s
Most of the Australian red cedar brought to Sydney in the 1820s was shipped from Kiama Harbour.

Late 1880s
A popular large, new bathing place incorporating the original small bathing pool at Blow Hole Point was made into men’s baths by private citizens in anticipation of a flow of tourists from the South Coast railway. The pool was to be 68 feet by 45 feet and gradually deepen from three feet to eight feet.

By 1889, the new baths were complete, with the east wall of the swimming baths and a fence in place.

1892
Led by William Kelly of the Kiama Progress Association, townspeople  improved the Men’s Baths for the season.

1893
Led by William Kelly, townspeople extended the Baths for the season and Kelly formed the Kiama Swimming Club.

1894
The original baths built by private citizens were handed over to Council. The 287 pounds required for construction of  new baths came from a  NSW government grant of 200 pounds, public subscriptions and 14 pounds, sixteen shillings and five pence from the Kiama Council.

The new improved men’s baths at Blow Hole Point were opened on New Year’s Day 1894 by the State member for the District, G. W. Fuller. Mayor Hindmarsh and a crowd of 400 were present. The Balmain Swimming Club and the Eastern Suburbs Swimming Club competed in the swimming carnival hosted by the Kiama Swimming Club.

1898
To the surprise of some townspeople, many female spectators attended a swimming carnival at the Blow Hole Point Men’s Baths.

1899
The New Year’s Day carnival at the Men’s Baths included a schoolboys race and  hundred yards inter-club handicap race with a prize of six pounds and six shillings.

1900
The Men’s Baths were improved by removing rock.

1905
Kiama Council rescinded the law preventing bathing at the Men’s Baths between 10am and 5pm.

1928
Consideration was being given to using the Blow Hole Point Men’s Baths for mixed bathing.

1930
The Kiama Chamber of Commerce installed electric lights at the Baths.

1931
Kiama had its first night swimming carnival at the Continental Baths.

1999
The Council holiday park at Blow Hole Point included the rock pool in its list of facilities to attract visitors.

This website is owned by All into Ocean Pools Inc,  a not-for-profit, volunteer community … END_OF_DOCUMENT_TOKEN_TO_BE_REPLACED