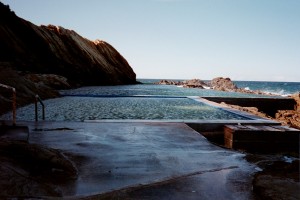 Adult and wading pool complex sited at the bottom of the cliffs below Scenic Drive, Bermagui. Beyond an intimidating warning sign, a steep set of stairs leads down to the pool from the modern amenities block on Scenic Drive.
Photographers create memorable images of this pool.

Historical notes
The earliest inhabitants of the Bermagui area were the Yuin people.

Nineteenth century
Bermagui became a shipping port and the town grew around the wharf. The Horseshoe Bay Hotel dating from 1895 is one of the oldest buildings in Bermagui.

1901
Bermagui’s Horseshoe Bay Hotel, claimed to be ‘the Premier Guest House on the South Coast of NSW’.

1920s
Visitors camped on the flat in front of the Horseshoe Bay Hotel and the recreation ground.  Horseshoe Bay was equipped with a bath house for ladies on the beach behind the old shipping wharf. Its northerly aspect meant that Horseshoe Bay was considered a safe beach, without the deep southerly swell that affects nearby Beares Beach.

1932
As the village of Bermagui was ‘becoming increasingly popular with tourists, particularly from inland districts’, it was proposed to make further provision for summer camping. About 50 people in Mumbulla Shire were on unemployment relief.

1933
The capture of a 232-pound (105-kilo) black marlin off Montague Island triggered a flurry of fishing activity, that established Bermagui (close to the edge of Australia’s continental shelf) as a leading centre for big-game fishing.

1935
Bermagui’s benefactor, retired grazier Bill Dickinson, was in his late sixties and living at the Horseshoe Bay Hotel.

1936
International author and angler Zane Grey’s  camp site at Bermagui was further developed and named Zane Grey Camping area in his honour. Trustees were appointed to manage the camping area, but their control extended only to the high-water mark and did not include the fairly sheltered spot for swimming between the rocks known as Blue Hole. That swimming place was less than half the size of the current Blue Pool.

Bermagui philanthropist Bill Dickinson initiated a project to develop the Blue Hole into a good-sized, saltwater pool. Unlike the seawater pool at Bermagui’s Horseshoe Bay that was designed primarily for bathing, the Blue Pool would be suitable for training and competition swimming.

1937
Following a visit to Bermagui, Eric Spooner, the NSW Minister for Works and Local Government, offered an additional grant of 50 pounds for Bermagui’s headland drive and a grant of 200 pounds towards the cost of making improvements to the rock baths at Bermagui South, provided local residents raised a further 100 pounds.   By the time the agreement for the Blue Pool grant arrived in July, residents had already spent about 100 pounds on work at the pool. Local labour enlarged the original pool by blasting the rock away with dynamite, then shovelling the rubble into wheelbarrows and tipping it over the edge into the sea.

Spooner said he was aware that 118 pounds had been contributed locally to the Blue Pool project, but had suggested raising a further 100 pounds locally to match the government grant of 200 pounds. The local parties who explained the pool initiative had after all advised Spooner that local people could easily raise this amount and both he and local MLA Bate had each contributed a pound to the effort. Local fundraising would demonstrate ‘acceptance of the principle that the government must not be expected to fund the full cost of local works’.

By then the Bermagui District Surf Life Saving Club believed that while they could not raise a hundred pounds, they could do work to that value. They later managed to raise 76 pounds, expected to have the balance by October 1937 and hoped that the pool would be available for the coming swimming season.  The Bermagui lifesavers sent Council a cheque for 88 pounds to cover their contribution to the Blue Pool project, and the council engineer submitted plans and specifications for erecting concrete walls and excavating rock to the Local Government Department.

By November 1937, the Bermagui District surf club had spent an additional 12 pounds on excavation at the Blue Pool since Minister Spooner promised the grant. The Club  believed they had received agreement from Spooner via their local MLA that this work, plus their 88 pound contribution fulfilled the requirement for local funding.

There were sufficient funds left from the headland drive project to erect the protective fences near the Blue Pool requested by the trustees of the Zane Grey Camping reserve.

1938
The Mumbulla Shire Council contracted out the work at the pool. By February, the contractors at the Blue Pool had practically finished work under the original contract, but after discussions with the local member and the surf club, an additional 100 pounds was allocated to cover a flight of concrete steps, extending the rear concrete wall to cut off a wading pool for children and further rock excavation.

In May, Minister Spooner offered a further grant of 300 pounds for construction of a dressing-shed at the Blue Pool. Council had contractors construct the shed.

1939
By January 1939, work on the dressing-sheds and subsidiary works at the Blue Pool was complete. Bermagui resident Bill Dickinson personally paid for concrete steps to replace the steep dirt track leading down to the pool, concreting the floor of the wading pool and the back wall of the pool and for two water tanks for use by picnickers at the Blue Pool. His total contribution to the pool project was at least 300 pounds. Council wrote thanking Mr Dickinson for his generosity.

The Local Government Department argued that  the pool’s dressing-sheds, which were not strong enough to withstand heavy seas. The Local Government Department insisted the Council Council should strengthen the shed and take full responsibility for any damage to the dressing-sheds by high seas. The changing sheds have since been washed away by high seas.

1942
Fears of a Japanese invasion prompted the setup of a coast watch above the Blue Pool.

The Bermagui South Progress Association advised Council that the approach to the Blue Pool scoured very badly after rain, but Council was unable to take any action to gravel the approach.

1960s
The growth of Canberra brought a new set of tourists to Bermagui.

1990s
The beautiful Blue Pool was considered good for swimming and snorkelling.

Though both the Blue Pools are flushed at high tides, a pump had been installed to maintain its water levels for the benefits of locals and tourists. A modern amenities block stood at the top of the cliff.   More widespread concerns about safety meant the Blue Pool, along with other NSW ocean baths and surf beaches, needed more warning signs and ongoing water quality monitoring programs.

2005
A “See our Seas’ coastal explorers workshop organised by the Sapphire Coast Marine Discovery Centre at Eden listed the species of plants and animal found at Bermagui’s Blue Pool.

Funds were allocated to replace the public toilet and steps at the Bermagui Blue Pool.

Water quality monitoring demonstrated the cleanliness of water at both the Big Blue Pool and the Little Blue Pool.

2006
Water quality monitoring gave a five-star rating to both the Big Blue Pool and the Little Blue Pool, which had 100% compliance with national water-quality guidelines.

This website is owned by All into Ocean Pools Inc,  a not-for-profit, volunteer community … END_OF_DOCUMENT_TOKEN_TO_BE_REPLACED