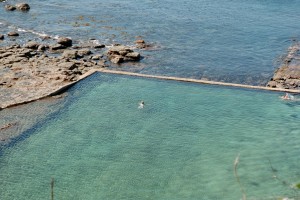 Ocean pool on a wide rock platform with a spectator stand built against the hill. Accessed from the Boatharbour carpark by a path through the reserve which has picnic tables and toilet block.

1820s
Red cedar was shipped from Gerringong’s small boat harbour. Once the cedar was cut out, dairying became the district’s main industry.

1884
Jetty works from 1884 established Gerringong as a regular destination for small ships transporting dairy products until about 1900.

1893
The extension of the South Coast railway to Bomaderry lured the lucrative milk trade away from the port of Gerringong.

1894
The Gerringong Council wanted to dedicate part of the Gerringong wharf for use as a ladies baths. But when the NSW government suggested that the Council could take over responsibility for the wharf, Council sought a more convenient site for the baths. No rates could be expended on the wharf. By that December, only the lack of funds for material was delaying the construction of ladies baths.

1905
According to the Illawarra Steam Navigation Company’s illustrated handbook, Gerringong had ‘good seabaths in a park with lawn tennis courts’ and was becoming ‘a favourite resort for visitors’.

1911
Opening of new men-only baths in a more exposed site at Boatharbour enabled the existing baths to be reserved for use solely by women and children.

Early 1920s
Conflict over use of the rock platform arose between a licensed Sydney shell-grit miner, whose workmen had to cross the Ladies Baths up to 18 times an hour and the Gerringong community, which wanted to preserve both the privacy of the women’s baths and their local practice of exploiting the shell-grit resources at no cost.

1927
Soon after its formation in 1927, the Gerringong Progress Association urged improvements to the Boat Harbour Park and Ladies Baths. Aldermen wondered ‘whether it’s the ladies or the baths’ that attracted men to the Ladies Baths and whether one of the existing baths should be declared ‘continental’. The counter view was that ‘there are a lot of ladies in Gerringong who’ll never go into Men’s Baths or fall in with the continental idea. They have their own baths and it is Council’s duty to provide them’.

Eventually Council decided to fix the Ladies Baths and then the Men’s Baths.

The reserve at Werri Beach was a camping area with fees set by Gerringong Council at five shillings per week or one shilling a night. The reserve established at Boatharbour remained the ‘ratepayers’ reserve’, the only seaside reserve in the municipality, where camping was not permitted.

1929
Weather delayed work at the Baths. New roofing was needed for the Ladies dressing-sheds.

1930
Some ladies from Nowra who came up to Gerringong for a swim found a lot of men in the Ladies Baths. The ladies would not go in and were very disappointed that their planned swim was not possible.

While acknowledging that ‘a man might want to swim with his wife or children’, Gerringong aldermen agreed that ‘Gerringong is not like a city’ and ‘some of our ladies are a little shy’ and ‘don’t want to plunge in with men’.  Despite one aldermen’s assertion that ‘there is no excuse for men going to the Ladies Baths’, it seems that several aldermen had been observed using the Ladies Baths. Seaweed in the Men’s Baths was again offered as a justification.

One alderman complained that ‘as things are now, if I want to teach my children to swim, I cannot do so in Gerringong’. When considering setting hours when men could go with their wives and children to the Ladies Baths, Council noted that ‘costumes often worn at the Men’s Baths are not such as would be worn to continental bathing’.

1932
Both the men’s baths and women’s baths at Boatharbour were in use and Gerringong Council was even considering a federal loan to create a continental bathing place.

1935
Suggestions for improvements to the Ladies Baths were back on the agenda. Steps to the dressing sheds constructed some 19 years earlier were dilapidated and unfit for use and a ramp was needed down to the baths. Materials were on the spot and the cost by relief labour was not great.

Depression-era emergency relief men using 14 bags of cement improved the Ladies Baths at little cost. Council discussed rebuilding the rails leaning up to the dressing-sheds at the Ladies Baths, but further work was deferred until the ‘finances of council were better and a new structure could be erected’.

1937
By February, both the Gentlemen’s Baths and the Ladies Baths were leaking and empty.

1942
Both the Boatharbour baths were in a bad state, hardly fit to swim in. Cleaning of both the Gentlemen’s Baths and Ladies Baths had to wait until a suitable tide.

A racing greyhound named Socialite was expected to recover after falling 100 feet into the Ladies Baths, when chasing a rabbit on the cliffs above the pool.

2006
Pool still in use and maintained by Kiama Council.

This website is owned by All into Ocean Pools Inc,  a not-for-profit, volunteer community … END_OF_DOCUMENT_TOKEN_TO_BE_REPLACED