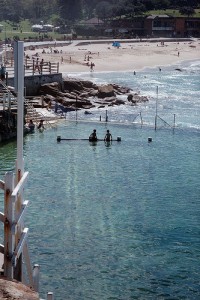 Formalised baths, a little south of the Bronte Bogey Hole and the large and beautiful Bronte Park that attracts crowds on the weekends. Also known as the Bond Ocean Pool after lifesaving pioneer and swimming teacher, Major Bond. This nineteenth-century pool was adapted for lap and competition swimming by using a wooden turning board to define a rectangular course within the pool. Featured on postcards since the early 1900s, this pool attracts many photographers and artists. The Bronte Baths have strong links with early twentieth century diving and swimming star Alick Wickham and the development of the Australian Crawl stroke.

Waverley Council set aside 150 pounds to build a pool at Bronte in 1883, but had difficulty getting permission from the NSW Department of Lands to occupy the site near the popular Bogey Hole at South Nelson Bay.

1886
At Waverley Council’s request, the NSW government gave permission to Mr A. Williams, an engineer with the Harbour and Rivers Branch of the Department of Public Works, to design and supervise the construction of public baths at both Bronte and Bondi.

1887
The lease was granted at a cost of 20 pounds a year, the Bronte Reserve was created and sea baths opened for segregated bathing. Council set a further 235 pounds aside for the Bronte Baths project. The Bronte Baths cost 235 pounds more than the original estimate, but the torrential floods of April 1887 may have increased the construction difficulties.

F. W. Lloyd was appointed caretaker of the baths on 18 October 1887.   In late 1887, after complaints to Council about bathing during prohibited hours, Council adopted regulations for the conduct of the Bondi and Bronte Baths. The Bronte Baths 1887 Regulations stated ‘gentlemen could bathe between daylight and 10am and from 4pm ’till dark each day. Ladies were welcomed from 10am to 4pm daily’ except on Sundays and Public Holidays, when the baths  were reserved exclusively for men ‘from daylight to dark’ and that ‘each person using the baths shall wear an appropriate bathing dress’. Baths entry cost fourpence for adult and tuppence for children. Monthly tickets were available and towels could be hired.

1888
In January, Council formally recorded its grateful appreciation for the satisfactory manner in which Mr Williams had supervised the work and for the NSW government for making his services available.

Year of the earliest known photo of the Bronte Baths

1892
Renewing its five-year lease of the baths cost Council 10 pounds per annum.

1893
Following gale damage to the baths, removal of the dressing shed was recommended at a cost of 50 pounds.

1894
Charles Kindred took over the lease of the baths.  The Eastern Suburbs Swimming Club moved its headquarters from the pool at the Coogee Aquarium to the Bronte Baths.

1895
Harry A. Wylie, champion distance diver of Australia, took a five-year lease of the baths at 100 pounds a year.

1898
Harry A. Wylie was a popular lessee and under his management the baths offered both showers and the hot sea baths popularised by the medical profession. The baths were 150 feet end-to-end, but longer on the sea wall and 72 feet wide at the widest part. Large boulders beyond the concrete wall on the seaward side helped break the force of the waves, making the baths safe even in high seas

1903
Despite a lack of documentary evidence, the Bronte surf club dates its operation back to 1903 with Bond’s squad developing the first rescue reel in 1904 and building the first boat in 1905.

1907
Waverley Council had spent about 400 pounds on the swimming baths at Bronte.

1908
Waverley Council accepted W. H. Bond’s tender of 201 pounds 10 shillings, including a cottage for the baths.

1921
The Bronte Splashers swimming club formed and included several older members of the Bronte Surf Life Saving Club. Its aims included creating ‘a friendly feeling of good will between all beach and baths swimmers’, holding races and arranging social functions for its members. Winter swimming was a feature of the club.

1923
Council accepted John Bond’s tender of 325 pounds for the lease of the baths for three years. Bond introduced mixed or continental bathing on Sundays, holiday afternoons and evenings from 1pm.

1925
Baths improvements costing 1,700 pounds included a room for the swimming club and the installation of a centrifugal pump. Dennis Brown was the lessee at the end of 1925.

1930s to 1940s
Sydney commercial photographer, Sam Hood photographed boy scouts and swimming races at the Bronte Baths.  A photograph of Bronte Beach at low tide shows a diving board at the baths.

1958-59
Bronte Amateur Swimming Club had a record membership of 185 members.

1960s
Photographs show rather ugly baths buildings clustered on the cliff above the pool.  Storms destroyed dressing sheds at the Bronte Baths.

1987
Alderman Carolyn A. Markham, the first female Mayor of Waverley, unveiled a plaque commemorating a centenary of community use and enjoyment of the Bronte Baths.

1991
Bronte’s baths and park were proposed as a heritage park.

1990s
The Bronte ocean pool was closed for well over the expected time for a $250,000 renovation. Afterwards, there were complaints that the new pump did not work and that algae obscured the newly tiled lane markings.

1999
Local artist Martine Emdur exhibited a ghostly image of Bronte Baths in the moonlight in her Coasting exhibition at the Art House Gallery.  The Sea Theatre Festival (also held in 1996 and 1997 but not 1998) ended at Bronte Park with the Synchronised Sushi Swimmers performing in the rock pool.

2002
Bronte rated well on the NSW cleanest beaches list for 2002.  The NSW government created an aquatic reserve from Bronte to Coogee. Within this protection zone, which extends to 100 metres offshore, recreational fishing is allowed, but there are bans on taking intertidal invertebrates such as oysters, mussels, crabs and pipis.

2003
Waverley Council refused permission for QANTAS to film an advertisement in its I Still Call Australia Home campaign at the Bronte Pool. Council felt the area, which already attracted five million visitors a year, did not need the international publicity, nor an enforced three-day closure of the pool at the busiest time of the year.

In August, The Weekend Australian Magazine printed a photograph by Dean Sewell showing the standing figure of teenage boy in a full-length wetsuit holding on the chains at Bronte Baths amid a massive swell.

2004
Death of Evelyn Whillier a regular swimmer at the Bronte Baths. An active member of both the Bronte Breakers and the Bronte Amateur Ladies Swimming Club, she had coached swimmers and gave swimming lessons for more than 40 years. As Evelyn de Lacy, she had swum for Australia at the Berlin Olympics in 1936. The Heroes Walk created at Bronte Beach by Waverley Council acknowledged her contribution to swimming and the Bronte community.

2005
According to Waverley Council’s 2005 Plan of Management for Bronte Park reported that clubs  swimming at the Bronte Baths comprised:

2006
At an RSL interclub carnival at Bronte Baths, the relay race for the Bronte Shield was won by Coogee-Randwick with the Bondi Diggers coming second. The result was surprising as the Bronte RSL Swimming Club was not often beaten at its home pool. Over a hundred people attended the BBQ in Bronte Park after the carnival.

After their $250,000 facelift by Waverley Council, the Bronte Baths were praised as one of Sydney’s top ‘plungeworthy’ pools in the Australian Traveller magazine. This irregularly shaped pool contains a rectangular course with marked lanes and caters to ‘lap-swimming grandmothers in floral caps’ to families and ‘skylarking youngsters’.

This website is owned by All into Ocean Pools Inc,  a not-for-profit, volunteer community … END_OF_DOCUMENT_TOKEN_TO_BE_REPLACED