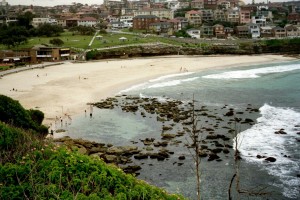 This ring-of-rocks pool is a modified  ‘natural’ Bogey Hole, a reef at the southern end of Bronte Beach with a hole at its centre. Close to the Bronte Baths and the large and beautiful Bronte Park that attracts crowds on the weekends. Though well-known to users of the beach, the baths and the Eastern Suburbs coastal walking track, this pool is not as popular with photographers as the nearby Bronte Baths.

1864
Waverley Council asked the NSW government to place a reserve at the area, then known as South Nelson Bay, under council control for public recreation and ‘sea bathing’.   The Bogey Hole at South Nelson Bay was already a popular bathing place

1885
Waverley Council requested the NSW government to obtain and dedicate three or four acres of the Bronte Estate opposite the Bay for public recreation.

1886
The NSW government dedicated 14 acres for Bronte Park and Waverley Council was appointed as trustee for the park. Council was asked to compel bathers at Bronte Beach to wear suitable costumes..

1905
A petition asked Council to extend the Bogey Hole at Bronte.

1939
A photograph of Bronte Beach at low tide shows many more rocks than at present around the Bogey Hole.

1996
A pod of about 15 dolphins jumped into Bronte’s Bogey Hole and rode the waves, delighting a crowd of about a hundred onlookers.

2001
A man swimming in the Bronte Bogey Hole was bitten by a gummy shark that had to be cut from his arm. He took the shark with him to hospital and later home to eat.

2002
Bronte rated well on the NSW cleanest beaches list. Water quality had improved since the days when the stormwater channel used to come out near the Bogey Hole.

2006
Surf club nippers acquired and practised some of their surf skills at the Bogey Hole.

This website is owned by All into Ocean Pools Inc,  a not-for-profit, volunteer community … END_OF_DOCUMENT_TOKEN_TO_BE_REPLACED