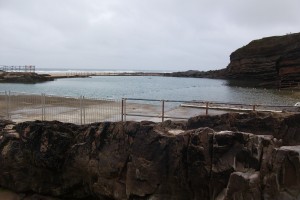 This large pool (maximum length 90 metres, maximum width 45 metres) in Cornwall is a mix of concrete and rock and is one of the few tidal pools still in use in the UK. The RNLI (Royal National Lifeboat Institution) beach lifeguard tower is sited above the sea pool.

Historical notes
1929
The pool was created to provide safe bathing and swimming at Summerleaze Beach in North Cornwall for residents and visitors.

1953
Bude had the first Surf Life Saving Club in the UK.

1993
Amid fears that North Cornwall District Council might close the pool on public liability grounds or cease to fund its upkeep, a 3000-signature petition about the Bude Sea Pool demonstrated the pool’s importance for residents and visitors. A 1993 survey showed people regarded the pool as a safer alternative to swimming in the open sea and so much safer than the sea that they saw little need for a lifeguard to supervise the pool.

2004
The 90-metre Bude Sea Pool was one of the country’s largest and most popular sea pools and only one person had ever drowned in the pool. This pool and other British sea pools nevertheless began to be officially considered unsafe because they could not offer the same level of water clarity and safety as  indoor pools.

The Health and Safety Executive recommended that North Cornwall District Council close the Bude Sea Pool on health and safety grounds until improvements were made. Some 6,500 people signed a petition opposing closure of the pool. North Cornwall District Council closed the pool and had it drained, cleaned, equipped with new safety rails and then rostered extra lifeguards so that the pool could be reopened.

2006 to 2008
North Cornwall District Council provided lifeguards at the pool. The RNLI (Royal National Lifeboat Institution) provided lifeguards for Summerleaze Beach. Lifeguards encouraged people to use inflatable toys in the sea pool rather than in the open sea.

The RNLI and the Bude Surf Lifesaving Club made their own supervision arrangements when using the pool for training or other purposes outside the swimming season.

2009
There were growing concerns for the pool’s future.

2010
Cornwall Council announced that it would cease to fund the maintenance and operation of the pool in 2012.

The STOP (Save The Old Pool) action group held its first meeting.

2012
Cornwall Council ceased to fund the maintenance and operation of the pool. Friends of the Bude Sea Pool took over management of the pool and their efforts to raise funds included renting and leasing of beach huts next to the pool

2015
The pool continues to be managed by Friends of the Bude Sea Pool (FoBSP), who still need donations and support to secure the future of the sea pool considered a unique part of Bude’s heritage.

The charity Friends of the Bude Sea Pool works hard to manage the pool and raise the funds needed to keep their pool in good order. Their fundraising efforts have included seeking sponsorships and donations, staging an art auction, a 22-mile
swimathon at the pool, a relay swim across the English Channel, a charity bike ride, a quiz night and selling merchandise such as caps, clothing, key rings, pens and mugs.

This website is owned by All into Ocean Pools Inc,  a not-for-profit, volunteer community … END_OF_DOCUMENT_TOKEN_TO_BE_REPLACED