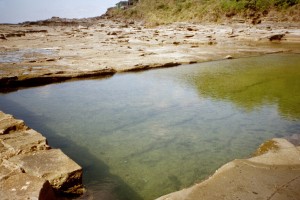 A man-made pool located within the Royal National Park. Created by a shack community for children’s swimming and to store  live fish and keep other food and drinks cool, this pool is now considered a heritage site of interest to park visitors. It’s quite a steep walk down here from the nearest road.

Late nineteenth century
Tracks from the railway stations at Waterfall, Helensburgh, Lilyvale and Otford leading down to the pastoral holdings on the coast became popular with bushwalkers and campers. The track to the beach at Bulgo ran through John Dwyer’s land which had a 100-foot Crown Land reservation.

By the late 1880s, timbergetters working for the railway and the collieries had spread word of the beautiful beaches at Bulgo, Era, Garie and Burning Palms. These beach areas became favoured picnic and holiday places for Helensburgh residents, who camped and fished at Bulgo, the closest beach to Helensburgh and easily accessible by train to Otford.

1930s to 1950s
Most of the Bulgo cabins were built by a cabin community linked to Helensburgh and local mining activity. Except for local timbers, most of the materials for the shacks had to be carried in down long tracks and steep hills. Siting of the cabins was influenced by the Crown reserve established in the 1830s.

In 1932, when all but 10 miners in the Helensburgh colliery were paid off, some unemployed miners and their families moved to Bulgo, Burning Palms, Little Garie and Era  to live off the land. Fish, deer and rabbits were sources of free food.

By the 1940s, some Bulgo residents commuted by train to mining jobs in Helensburgh. The shacks built at Bulgo between the 1930s and the 1950s were on land then still under freehold ownership, used for grazing purposes and long popular for camping.

Pat Carrick, manager of the Coalcliff colliery ran cattle on an area which included The Green at Bulgo from the 1930s. Bulgo residents remember cattle wandering past the cabins on the beach on their way to The Green until the 1950s.

After Queen Elizabeth II visited  to Australia in 1954, the National Park was renamed the Royal National Park. The Bulgo lands were transferred to Wollongong Council.

Early 1960s
A rock pool at the southern end of the Bulgo Beach within the rock pool adjacent to the Green was dynamited to enlarge it for children’s swimming and for storage of live fish and perishable items. The dynamite came from the Helensburgh coal mines. The Bulgo community also blasted out a channel in the rock shelf in the middle of the beach to improve boat access.

1976
The Bulgo lands were incorporated into the Royal National Park.

1989
The Bulgo owners were formally licensed to occupy their cabins. The former grazing land known as The Green in the Bald Hills area south of Bulgo and its six cabins were added to the Royal National Park.

2005
The rock pool at Bulgo is now considered a good archaeological and historical feature which should be maintained. Heritage week celebrations included a walk to this pool.

This website is owned by All into Ocean Pools Inc,  a not-for-profit, volunteer community … END_OF_DOCUMENT_TOKEN_TO_BE_REPLACED