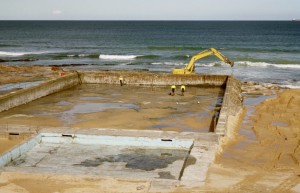 Rectangular main pool with an attached children’s pool. Close to the surf club. View of the Woonona Baths to the south.

Late 1800s
Bulli was a coal-mining area, ‘Black Diamond’ country. The panoramic view from the top of the Bulli Pass attracted  tourists.

1894
A meeting at Dickson’s Hotel at Bulli sought funds to construct suitable baths for Bulli and Woonona and the local MP suggested applying for a lease of the foreshore. The enthusiastic meeting decided to form a swimming club and school clubs after the baths were erected.

1897
A sub-committee of the Bulli Progress Association meeting at Dickson’s Hotel sought funds for public baths for Bulli through the efforts of friendly societies, staging a concert on a grand scale, as well as soliciting for subscriptions throughout the district.

1902
A total of 23 pounds was collected and 30 pounds subscribed at a meeting at Stokes Hotel in Bulli about construction of the Bulli Baths at Floyds Rocks at Waniora Point,  ‘where with little expense, nice baths can be erected close to all’.  By March 1902, ‘the sea baths which Bulli was to have for this season and for which some 10 pound was collected is still all to make’.

1903
Baths at Floyds Rocks, south of the present baths, were in use and ‘crowded nearly all day’ on the Sunday in March, when a collection was taken up for a bathing shed. Certain hours at the baths were set aside for ladies and others for gentlemen.

1905
Time-segregated bathing was still in force at the Bulli Baths.

1910
A gale washed away the change shed at the Bulli Baths.

1916
Work on the rock pool began. By November, the contractor Mr T. W. Evans had finished enlarging the Bulli Baths. The Bulli Surf Bathers and Life Saving Club was praised for the way it had worked to secure the money from an Easter Monday carnival,  members’ subscriptions and donations, when other clubs had tried for the previous four years to raise sufficient funds.   While the new baths were 35 yards long and considered ‘as good as any outside of the city’, the surf club hoped to widen them if the support was forthcoming.

1921
Bulli Beach and its Baths were transformed thanks to the beach improvement committee. New baths twice the size of the original were built adjoining the old baths.

1927
Electric light was installed and used at the baths.  A Sydney team gave a fine exhibition at a February Sunday carnival at the Bulli Baths attended by 1,500 people.

1928
The Baths had been in excellent condition and much patronised during the holidays. The annual meeting of the Bulli Progress Association entrusted its secretary with attending to repairs, enlarging and cleaning of the Bulli Baths.  Bulli Shire Council agreed to supply Bulli Amateur Swimming Club with a medicine chest and allowed the Club to have sole use of the baths for a carnival on Easter Monday. That carnival included events for males and females as well as novelty events such as a barrel race, egg and spoon race and tightrope walking.

The Bulli Amateur Swimming Club also wanted to extend the baths and enclose the verandah on the lower part of the dressing sheds to form a club room. Council allowed the Bulli Swimming Club to use timbers from the old dressing-shed at Bulli Point to build seats around the baths and a club room and provide electric light poles for night carnivals at the baths.

Bulli Swimming Club supplied Council with names of people to act as beach inspectors and argued that the pavilion was dangerous and should be demolished.   Members of a Tramway Swimming Club competed with the Bulli club at the Bulli Baths. The Bulli club’s lady members put on a swimming exhibition, the diving troupe performed and the Tramway team gave an exhibition of water-polo. Ignoring the history of water-polo at Kiama, the Illawarra Mercury, referred to the water polo exhibition at Bulli as ‘the first game played on the South Coast’.

In September 1928, the Bulli Progress Association asked Council to pay 10 pounds to the Swimming Club for additions and repairs to the baths.   December 1928 saw another demonstration organised by the Bulli Amateur Swimming Club, featuring the Bulli Diving troupe and exhibitions of diving and swimming by the lady members.

1933
The Bulli Progress Association was suggesting Council increase the size of the Bulli Baths.

1936
The Bulli Surf Club asked Council to budget for enlargement of the Bulli Baths, which were patronised by 75% of the people who visited the beach. The headmaster of the Bulli School also suggested improvements to the bath that would remove the need to taken school children to Austinmer for swimming lessons. Council refused the school’s request for a subsidy to address the cost of transporting school children to the baths.

1938
Bulli Council accepted a tender for 1,871 pounds 12 shillings and sixpence from a Sydney firm to construct the new Bulli Baths, an  Olympic-sized pool with a children’s pool. These new baths were intended to add to the attraction of Bulli Beach and stimulate still-water swimming competitions.   A large crowd attended the opening of the 50-metre by 30-metre  pool by Cr Thompson, a man who would have liked it made compulsory for every boy and girl to learn to swim. The NSW ASA swimming stars at the opening carnival included four Empire Games representatives, as well as the female state diving and junior breast stroke champions. The carnival included an old buffers race, a schoolboys race and music from the Wollongong Steelworks Band.

1939
The ramp leading to the baths was to be removed and an opening made in the north end of the kiosk to give access to the ladies dressing shed. Construction of a children’s baths was ‘to be proceeded with when conditions permit’.

1940
The Bulli Local Committee wanted the baths emptied and the sand and seaweed removed.

1942
No funds were available to clear a fair amount of seaweed from the Bulli Baths.

1945
The Bulli Local Committee wanted alterations to the valve at the Bulli Baths.

1955
Founding of the Bulli High School, which used the pool for school sports and learn-to-swim classes.  Australian champion swimmer, Jon Henricks, swam in front of a crowd of over a thousand people at a carnival at the Bulli baths. Henricks later swam for Australia at the 1956 Olympics in Melbourne.

1973
Wollongong Council’s townplanner advised that development of the indoor pool complex proposed by Bulli Surf Club was neither legal nor desirable and would restrict access to the rock baths. Council assented to development of the project which was later ruled out until changes were made to the Local Government Act to permit surf clubs to build swimming pools as well as gymnasiums.

1993
A bike path behind the beach linked Bulli with Woonona Beach.

Late 1990s
The Bulli community demanded Council fix bad smells at the pool and address the apparent lack of pool maintenance. Pensioner Mal Roberts, who organised a 1,000-signature petition, said he’d call in support from winter swimming groups and the schools, if Council couldn’t find the money to rectify the pool’s problems. Residents petitioned Wollongong Council until the problems were resolved to their satisfaction and using the 50-metre pool was no longer ‘like swimming in sewage’ despite Council statements that the pool was cleaned every three months.

Locals worried about the impact the putrid pool would have on tourism, as most of the people in Bulli’s summer crowds were not local residents.   Wollongong City Council agreed to spend up to $20,000 ridding Bulli Pool of sludge by filling in the hole that had been collecting rubbish and polluting the pool, and to consider a full $120,000 renovation of the pool in two years.

1999
Bulli’s Olympic-size ocean pool remained an attraction for weekend visitors and those not confident in the surf.

2003
The rock pool was an attraction for visitors to the area’s B&Bs (Bed and Breakfast establishments), despite local complaints that the main pool was full of algae and slime and the toddlers pool was full of sand.

2004
The toddlers pool was free of the sand that had made it unusable.

2013
The only two clubs in South Coast Winter Swimming Association with any female members were the Stanwell Park Sea Eels and the Bulli Sea Lions.

This website is owned by All into Ocean Pools Inc,  a not-for-profit, volunteer community … END_OF_DOCUMENT_TOKEN_TO_BE_REPLACED