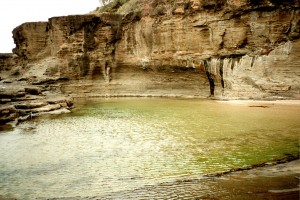 Natural pool on a rock shelf.  Mentioned in some tourist information about the Kiama district. Access involves a scramble over the rocks north of Werri Beach.

1820s
Gerringong had a small boat harbour from which much cedar was shipped. Once the cedar was cut out, dairying became the district’s main industry.

1890s
The South Coast rail line reduced shipping trade from Gerringong’s Boat Harbour, but far-sighted residents saw the possibilities of bringing tourists to the district and sought dedication of a recreation ground at Lagoon Beach (Werri Beach) only 1.5 miles from the Omega railway station. Werri Beach is the surf beach for the town of Gerringong and occupies the first broad valley south of Kiama. The reserve at this Beach became a favourite picnic spot for Gerringong people and visitors.

This website is owned by All into Ocean Pools Inc,  a not-for-profit, volunteer community … END_OF_DOCUMENT_TOKEN_TO_BE_REPLACED