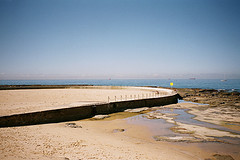 This large shallow children’s pool sited on the same rock platform as the Newcastle Ocean Baths is one of the few standalone ocean pools created specifically for children’s use.

An old tourist map for Newcastle shows this pool jammed with small boys in canoes circling the coloured concrete map of the world that once graced this pool. This pool is a popular subject for photographers and other artists.

1937
The Young Mariner’s Pool completed next to the southern end of the Newcastle Ocean Baths was considered both ‘educational and recreational’ as the bottom of this new  pool featured a map of the world in pigmented cement. This geographical pool originally intended fortiny children also appealed so strongly to  bigger children and was often crowded.

1939
A massive 1939 extension on the ocean-side of the existing ‘Young Mariner’s Pool’ created the present-day Canoe Pool. This  ‘new boat pool for children’ with a shelving bottom at the north rocks of Newcastle Beach  and to the side of the Ocean Baths was expected to be ‘popular with youngsters in the summer months’.

Early 1940s
The two sides of the pool were still referred to as ‘Young Mariner’s Pool’ and the Canoe Pool.

1950s
Photos show the map of the world at the Canoe Pool. A tourist map for Newcastle shows this pool ‘regarded as providing ‘perfect safety for children’  was jammed with small boys in canoes circling the pool’s coloured concrete map of the world .

1968
The Canoe Pool’s map was demolished.

1997
A feasibility study on restoring the map of the world produced estimates that Council considered too expensive.

This website is owned by All into Ocean Pools Inc,  a not-for-profit, volunteer community … END_OF_DOCUMENT_TOKEN_TO_BE_REPLACED