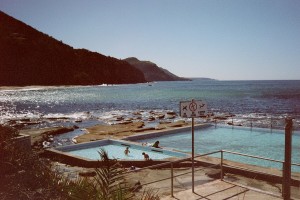 A pool created in the 1920s. Long popular with campers, other holiday-makers and residents.

Historical notes
As the name implies, Coalcliff is in a coal mining area.

1923
The newly constructed Coalcliff Baths [southern rock pool] opened on January 26 with a picnic and other entertainment and was well patronised during the holidays.

1928
When the Coalcliff surf club presented an account of 47 pounds to the Bulli Shire Council for the extension of baths, Council proposed setting a local rate to liquidate the debt, subject to consultation with the local association.

1933
The Coalcliff surf club was concerned about pollution of Patterson’s creek, which meant that ‘smellful’ matter was being washed back onto the beach and baths by the tides.

1939
Coalcliff was more popular than ever and the large number of campers included dozens on private allotments.

1942
When the Coalcliff Progress Association complained the baths were leaking and the dressing shed and lavatory were in poor condition, there was enough money in the local fund to fix these problem

1945
The cost of dressing sheds near the Coalcliff Baths was estimated as 775 pounds by the Bulli Shire Council engineer. The plans, which allowed for widening the baths by 20 feet to leave a 14-foot promenade between the baths and the sheds, were referred to the Coalcliff local committee.

1993
Coalcliff Beach was bypassed by most travellers, despite the charms of the park, the rock pool and the surf.

This website is owned by All into Ocean Pools Inc,  a not-for-profit, volunteer community … END_OF_DOCUMENT_TOKEN_TO_BE_REPLACED