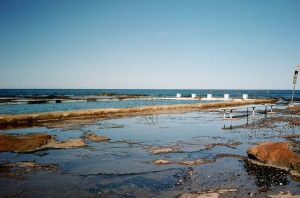 Pool with starting blocks sited on a wide rock platform. Built during World War I.
Photographers have created memorable images of this pool.

1915
Pool built by voluntary labour of around 40 men at weekends, other men worked on the baths when the mine was idle. Stone from the baths was used on the local roads.

1916
The Coledale surf club was established.

1921
Further working bees on the concrete wall of the Coledale Baths by ‘an enterprising band of citizens’. The Progress Association was selling stone excavated from the baths and made ready for use on the roads. Picture nights helped raise funds for the baths. The baths opened on 26 November 1921 with a swimming carnival with events for the older boys and a sports carnival featuring foot racing for the younger ones, plus music from the Bulli Band and plenty of valuable prizes.

By December, the Progress Association decided to spend 3 pounds fixing the valve and completing the wall at the baths, by then used by up to 300 people at a time and suggesting that if patronage increased, new baths would be required.

1922
A working bee of 16 men removed silt from the Coledale Baths leaving them ‘in capital order’.

1923
Coledale’s swimming baths were being well used during the holidays.

1926
Though ‘large enough for all swimming purposes on ordinary occasions’, the Coledale Baths were ‘taxed to full capacity’ during a February week. The Baths were still more popular than the surf.

1927
The Bulli Shire Engineer, Mr Harrison, was taking levels for the extension of the Coledale Baths to three times their existing size. The stone from the excavation was to be used on the local roads. The approval of the Coledale Progress Association was needed as the project was to be funded from a local fund raised for such purposes.

1930s
There were complaints that the Coledale Baths could only be used at high tide.

1934
The Coledale Pool was finished by men working for the dole.

1937
The Coledale local committee asked for the cleaning of the baths and removal of seaweed.

1942
George Hart, a 34-year-old ironworker from Balmain, struck his head on submerged rocks and drowned after diving in to rescue his six-year-old daughter who was swept out to sea from the Coledale rock baths. His 14-year-old son, who had been swimming with his father and sister, was also washed out to sea,  then onto rocks from which he ran to get help. Members of the Coledale surf club and staff from the Coledale hospital at the top of the cliff brought the little girl and her father to shore and attempted to resuscitate Hart. The Bulli Shire ambulance took him to a doctor’s surgery, but he could not be revived. The Hart family had camped at Coledale for the past three years, and Mr Hart had just come down to join his wife and children for the weekend.

At the 1942 inquiry into the death of Hart, Coledale lifesaver William McQuire testified that the big waves had lasted only ten minutes at high tide and the death was ruled to be an accidental death.

1944
The Coledale surf club was complaining about the dangerous state of the baths and the Council engineer agreed to give attention to removing the oyster shells and cleaning out the baths as soon as the tides were suitable.

Early 1960s
A petition with over 200 signatures went to Wollongong Council to keep the Coledale Pool in its existing location. The Coledale community was divided over whether to accept the Wollongong Council offer of new baths for the main beach given the risk of silting. Mr Frank Smith, president of the Coledale Improvement Committee, believed Coledale did not want the new baths and all that was needed was to have the razor-sharp oyster shells on the pool’s walls and floor concreted over. He believed the pool was ‘the cleanest of the coast’ and its location could not be bettered’ being right in the centre of town’, where  ‘south and north get an equal go’.

This website is owned by All into Ocean Pools Inc,  a not-for-profit, volunteer community … END_OF_DOCUMENT_TOKEN_TO_BE_REPLACED