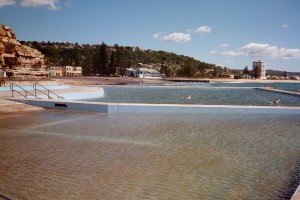 Sited at the southern end of Collaroy Beach. A classic ocean pool with chains. Pool complex of two interconnecting pools, namely a 50-metre pool and a smaller wading pool. Both irregularly shaped and sited to follow the curve of the nearby low-level rock face. Concrete promenade. This pool is a popular subject for photographers.

The Salvation Army inherited 500 acres at Collaroy from a settler family.

The area, the beach and a local street were named after the iron paddle steamer, PS Collaroy, stranded near the site of the rock pool in 1881.

1919
A young man was taken by a shark just off the Collaroy Rock Pool.

1935
The Collaroy Progress Association submitted a plan for a proposed extension to the rock pool, requesting Council to obtain a loan under the Unemployment Relief Scheme for the pool. Tenders were called in May.

At a Tourist Development Conference in Newcastle, real estate agent Henry F. Halloran  praised Warringah Shire’s investment of 225 pounds in improvements to the Collaroy Rock Baths. He saw the rock baths as adding to the attractions of the surf beach, encouraging more people to visit and attracting potential permanent residents.

1937
Work to deepen the rock pool and extend its length to 55 yards was completed under the Unemployment Relief Scheme. A women’s Amateur Swimming Club re-formed and used Collaroy’s rock pool for its carnivals. The Club’s membership grew rapidly and averaged around 175 members annually until the 1970s. Club events were held on Saturday afternoons, long-distance events on Wednesday evenings, plus carnivals and social events.

The Collaroy (Men’s) Amateur Swimming Club announced in 1946 that it would conduct Learn to Swim classes at the Collaroy Baths  on Saturday mornings.

The Collaroy Women’s Amateur Swimming Club also promoted learn-to-swim campaigns that taught many children and adults at the Collaroy pool.

On 6  April 1948, the Collaroy (Men’s) Amateur Swimming Club had its last recorded meeting.

1950s
Aboriginal boys and girls from inland NSW attending the annual Aboriginal Welfare Board summer camp held at the Salvation Army’s Collaroy centre were photographed swimming at the Collaroy Pool.

On 15 August 1952, the Collaroy Amateur Swimming Club reformed, with its members swimming on Sunday mornings.

After a late-1950s inter-club carnival  between Collaroy and Dee Why,  the Collaroy (Men’s) Amateur Swimming Clubs decided to hold 2 carnivals each year with the Dee Why Club and one a year with Freshwater Club

1960s
A winter swimming club, the Collaroy Crabs, was started as an adjunct to the men’s Amateur Swimming Club.

1966
The rock pool wall was reconstructed. Standard swimming pool step-ladders were installed on its northern and western walls.

1970s
The Collaroy pool was enlarged, its natural rock bottom concreted, external decking laid and an electric pump installed and public toilets built. Swimmers no longer tripped over and hit their feet on the bottom. Though the main pool was 50 metres by 25 metres and the wading pool 18 metres by 10 metres, this pool with no parallel walls remained fairly impractical for swimming carnivals.

1983
Widening of the western end promenade to the pool to 2.4 metres commenced.

1985
The Collaroy pool walkway was constructed.

1994
Council approval for swimming club use of rock pools for club races specified that the public must continue to have access to a minimum of two lanes in the pool during the club races.

1997 & 1998
As vandalism and damage in the parks and reserves adjoining Collaroy Beach and its swimming pool were linked to irresponsible consumption of alcohol in those parks, Warringah Council considered declaring an alcohol-free zone in the Collaroy Central Business District.

The rock pool was refurbished to level its surrounding walkway and increase the width of its southern wall. The pool was closed to the public in June for repairs and did not re-open until November 29.

While its much-loved pool was closed, Collaroy’s unofficial Lizards Club turned to ocean swimming. Community pressure had led to re-opening of the pool in early December, before the work was complete. While some problems with the pool had still to be corrected, the improvement was marked. The Collaroy Women’s Amateur Swimming Club, which had changed its name to the Collaroy Women and Associates Swimming Club, was back at the pool in early December. As part of the 1997-98 Swim safe program conducted in council and community pools, the Collaroy Amateur Swimming Club conducting classes at the rock pool before its Sunday races.

1999
Warringah Council began monitoring water quality in this pool and its other five rock pools.

Enraged at possible disposal of the so-called Collaroy Children’s Hospital site, which had been an extraordinarily public-spirited gift, local residents proposed the building be used for children or adults with spinal injuries, who could make use of the Collaroy rock pool and its modern wheelchair facilities.

Three schools a week used the pool during the swimming season.

2000
Swimmers complained that Collaroy pool was vile, slimy and not being cleaned properly, as Warringah Council had stopped scrubbing the walls and floor of the pool and only flushed it. Warringah Council denied any decline in high-pressure cleaning of the pool, noting that a build-up of slime could occur when high tides and high seas prevented the pool from being emptied. The Council spokesman attributed the oil slick on the water surface to body fat and the oils used in the base of sunblock creams.

2001
Collaroy was an almost flawlessly clean beach according to the EPA, but locals again complained about slime on the bottom of the rock pool. Apparently, due to the level of the outlet valve, Collaroy pool was the only Warringah ocean pool that could not be cleaned by high-pressure water-blasting. Cleaning staff needed to wear waders and use brooms to ‘sweep’ the bottom.

The viewing area next to the rock pool was used by swimmers, people hung over from the previous night, travellers, walkers, runners, and dreamers attracted to the still water of the pool. One of the Collaroy Lizards had swum at Collaroy for about 54 of his 80 years.

2004
Residents objected to council staff cleaning the Collaroy rock pool with a high-pressure hose attached to a water tap, while Sydney had water restrictions. While use of a new firefighting pump meant most of the water for pool cleaning came from the ocean, Warringah’s pools were normally cleaned at low tide and it was difficult to get that pump to work at very low tide.

2014
Members of  The Entrance Amateur Swimming Club travelled to Sydney’s Collaroy Rock Pool for their annual February competition with the  Collaroy Swim Club. The venue for this annual event alternates between the home pools for these two clubs.

The Collaroy Swim Club had a winter swimming program.

2015
The  Collaroy Swim Club website has images of the 2015 relay where the swimming club competed against the local surf life saving club.

The  Collaroy Swim Club had a winter swimming program.

The fees charged for the  Collaroy Swim Club‘s learn-to-swim programs covers insurance, a donation to a Vietnamese swimming programme and other costs.

This website is owned by All into Ocean Pools Inc,  a not-for-profit, volunteer community … END_OF_DOCUMENT_TOKEN_TO_BE_REPLACED