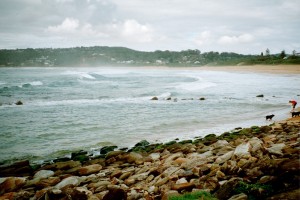 A ring-of-rocks pool that provides a 50-metre radius of safe swimming. Almost twinned with the MacMasters Beach pool to the south, even though the two communities are distinct. Was named the ‘Mavis Pool’, after the wives of the two key pool-builders.

1889
Travel into the NSW Central Coast improved after 1889 with the opening of the Hawkesbury Railway Bridge, the last link in connecting the capital cities of South Australia, Victoria, New South Wales and Queensland by rail.

Late 1950s
Copacabana land owners Jack and Mavis Kelly and Frank and Mavis Alderman saw the benefits of creating  a rock pool at the northern end of the beach. For a couple of years, they worked on weekends to form a rock pool, using crowbars and rock hammers to shift boulders when the tide was low. Jack Ferrier and Jack Kelly blew up huge rocks in the middle of the pool using sticks of gelignite and a string of wires from the car to set the detonators off from the battery current. A council grader helped finish Copacabana’s rock pool, named the ‘Mavis Pool’, after the wives of the two key pool-builders.

1988
Gosford Council assessed the pool as having moderate usage, and as being ideal for small children and in fair condition, but noted that rocks needed to be re-arranged after heavy seas. The pool was flagged for retention.

1990s
Copacabana was very much a residential and holiday-home area, with little in the way of tourist facilities. Its beach and pool were used mainly by locals and holiday-makers from Sydney.

2002
The lifeguard patrol covers the pool.

This website is owned by All into Ocean Pools Inc,  a not-for-profit, volunteer community … END_OF_DOCUMENT_TOKEN_TO_BE_REPLACED