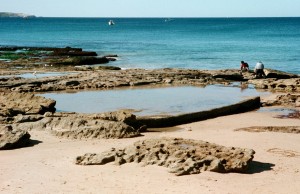 1888
The Oriental Hotel occupied the site near the present-day North Cronulla Hotel.

1932
Sutherland Shire Council decided to formalise the ocean pools, creating ‘spacious concrete bathing pools swept by breakers from the ocean’ and facilities for visitors close to the Cronulla surfing areas. The first rock pool was a children’s pool with a uniform depth of 18 inches that had been cut out of the rock shelf. The Shire engineer supervised the construction work.

The Minister for Local Government opened the main baths (132 feet long and 60 feet wide) and the neighbouring children’s pool on Eight Hour Day 1932. Sutherland Council and the Cronulla surf club  and the Cronulla Fire Brigade co-operated in activities associated with the opening of the Cronulla rock pools.

1939
Cronulla became the only Sydney beach with a railway station.

2003
An assessment of the Shire’s ocean baths was identified as a necessary part of the ongoing management of its coastal assets.

2005 to 2006
Incidents at the beach fuelled the December 2005 riots at Cronulla. Extra Beachsafe police were deployed to Cronulla for the rest of the 2005/6 beach season.

This website is owned by All into Ocean Pools Inc,  a not-for-profit, volunteer community … END_OF_DOCUMENT_TOKEN_TO_BE_REPLACED