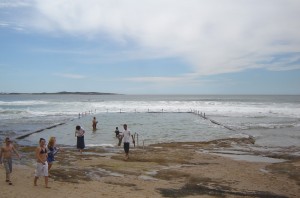 1888
The Oriental Hotel occupied the site near the present-day North Cronulla Hotel.

Early 1930s
The earliest pool on this site was probably one created by residents and Sutherland Shire Council decided to formalise the ocean pools, creating ‘spacious concrete bathing pools swept by breakers from the ocean’ and facilities for visitors close to the Cronulla surfing areas. The Shire engineer supervised the construction work on the section of the rock platform where Council had been granted a lease (Special Lease 29.43) on condition that the baths to be erected should be open to the public at all reasonable times.

The Minister for Local government opened these baths (132 feet long and 60 feet wide) and the neighbouring children’s pool on Eight Hour Day 1932. Sutherland Council and the Cronulla surf club  and the Cronulla Fire Brigade co-operated in activities associated with the opening of these  Cronulla rock pools.

In November, Council was accused of breaching its lease of the rock platform, by failing to erect warning signs regarding the depth of water in the pools, or provide lifesaving apparatus and information about ‘resuscitating the apparently drowned’. While agreeing to erect the warning signs, Council noted that any such signage had a limited effective life in the intertidal environment event. Council successfully argued that the presence of lifesaving apparatus and information on resuscitation at the North Cronulla and Cronulla surf clubs meant there was no need to provide the items at the ocean pools as lifesavers from North Cronulla club (or if they were unavailable from Cronulla club) would include the pools in the patrols on weekends and public holidays.

It was also anticipated that a group of female surfers who had competed as a team in a beach girls competition  would affiliate with the Royal Life Saving Society and patrol the baths. Yet when the ‘Ladies Surf Club’ applied in 1933 for the use of a life-saving reel in the rock pool, Council denied their request after taking advice from the official men-only surf clubs. The Cronulla surf club considered that a reel was appropriate only where swimmers were swept out of the pool, in which case the rescue was the responsibility of the men’s clubs, while the North Cronulla club was convinced that the ladies club was neither capable nor equipped for working with the reel. Neither club offered to train or otherwise assist the ‘Ladies Surf Club’ to develop skills for rescue work.

1939
Cronulla became the only Sydney beach with a railway station.

2003
An assessment of the Shire’s ocean baths was identified as a necessary part of the ongoing management of its coastal assets.

2005 to 2006
After incidents at the beach fuelled the Cronulla Beach riots of December 2005, extra Beachsafe police were deployed to Cronulla for the rest of the 2005/6 beach season.

The informal pool was still well used and had many regular users.

This website is owned by All into Ocean Pools Inc,  a not-for-profit, volunteer community … END_OF_DOCUMENT_TOKEN_TO_BE_REPLACED