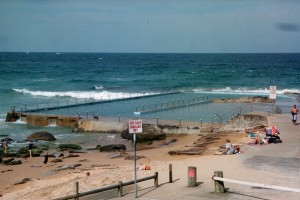 A 50-metre, tidally flushed pool at South Curl Curl Beach. Close to Stewart House on Carrington Parade. Home to a range of clubs. This rock pool  offers a 50-metre pool  and a  shallower section largely formed by rock. This pool is a popular subject for photographers.

1918
South Curl Curl acquired a new influx of weekend visitors and the rock pool at the southern end of the beach was a popular bathing place.

1925
The surf club was active in the enlargement of the rock pool to provide safer bathing. A public meeting about constructing baths led to the Curl Curl Improvement Association and South Curl Curl Life Saving Club forming a South Curl Curl Bath Committee to pressure council to enlarge the pool ‘for the children’ with the club raising funds for its completion via carnivals and social events at the clubhouse. A beauty pageant run by the swimming club helped  to raise funds for the pool’s construction.

1926
Warringah Shire Council completed construction of the South Curl Curl baths. The outer wall of this original rock pool is now the centre wall of the present pool.

1927
The baths were formally opened.

1928
After the surf club advised it would take no further responsibility for the control of the rock baths, a Council overseer took on this role.

Proposals were put forward for the enlargement of the rock pool.  A wall was constructed at the rock pool, creating two pools. The outer wall of the original rock pool is the centre wall of the present pool.

1950
Toilets and a change-room were added to the pool facilities.

Early 1960s
The Curl Curl Amateur Swimming Club formed following a meeting convened by South Curl Curl surf club. As the NSW Amateur Swimming Association did not then permit any of its affiliated clubs to have male and female members, the swimming club was officially divided into men’s and women’s sections. The surf club assisted the swimming club financially, and allowed to use the surf club for meetings, social functions and equipment storage.

1966
The men’s and women’s Amateur Swimming Clubs united to form one club and the pool was shortened to accommodate Olympic standard 50-metre races. This created a pool complex consisting of a ‘stilling basin’, a main pool (50 metres by 12 metres) and a wading pool (25 metres by 15 metres).

1970s
There were swimming competitions between the Amateur Swimming Club and the surf club.

Stewart House opened a secondary school and senior dormitory in 1977.

1990
A deck was added onto the clubhouse building to increase space available for the Frigid Frogs Club, which operates all year round.

1999
Warringah Council began monitoring water quality in this pool and its other five rock pools.  The pool catered for a range of activities and for patrons of all ages and abilities. The carpark behind the beach which joins the surf club with the swimming club building and rock pool provided several disabled parking places for direct access to the pool. The elderly retired locals who habitually sunned themselves at the base of the concourse wall were affectionately known as ‘the walruses’. Several high schools used the pool during weekdays in the swimming season. The wading pool was not only popular with children, it was also used as access to the surrounding rock shelf. Some locals expressed concerns about the pool being used for scuba lessons.

2002
At the 26th national winter swimming championships, the Frigid Frogs were again the strongest winter swimming club in Australia, finishing 71 points ahead of the Cronulla Polar Bears and the Maroubra Seals.

2003
On a day of gale-force winds, the police helicopter and two rescue service helicopters searched the seas after a pair of men were reported to have been pulled out to sea in heavy swells off South Curl Curl beach. It was not clear whether the men had been in the ocean pool or  swimming near it when the undertow took hold of them. The search for the two men proved unsuccessful and was abandoned.

This website is owned by All into Ocean Pools Inc,  a not-for-profit, volunteer community … END_OF_DOCUMENT_TOKEN_TO_BE_REPLACED