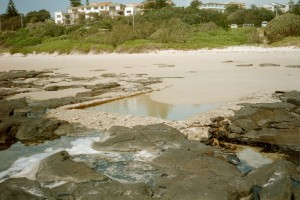 A children’s pool sited near the mouth of the Richmond River in residential East Ballina on Shelly Beach (on Ballina Head), just south of the Ballina-Lismore Junior Surf Life Saving Club and north of Ballina’s Lighthouse Beach. This seems to be the northernmost ocean pool on the New South Wales coast.

Early 1900s
Even before mixed daylight bathing and surfing was fully accepted on the New South Wales coast,  people visited Ballina on Sundays to fish, hire boats and paddle in the waves. Others visited during Christmas holidays or spent their honeymoons there. Some holiday-makers rented houses, while others camped in tents.

1930s
Ballina’s grew in popularity as a seaside resort because it offered camping, bathing, surfing, swimming and good oystering, as well as a pleasing set of landscapes.   Council had constructed a road across the sand connecting the town of Ballina with East Ballina, where ‘an excellent site for camping-out’ and dressing -sheds had been constructed with volunteer work and a small contribution from council.

The East Ballina beach was considered ‘a splendid bathing facility, shallow for a long distance out and ‘perfectly safe for children, when the waves roll shoreward in lazy languor, surfing may be indulged in with pleasure and absolute safety’.

This website is owned by All into Ocean Pools Inc,  a not-for-profit, volunteer community … END_OF_DOCUMENT_TOKEN_TO_BE_REPLACED