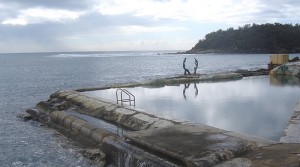 The first ocean pool north of Sydney Harbour is located in Manly’s Cabbage Tree Bay, the Fairy Bower pool is tiny, triangular and graced by two sculptures. It’s one of the smallest public ocean pools not specifically built for children and much younger than the earliest sea pools on Manly’s harbour beach.

This pool is ankle-deep at the eastern end and reaches a maximum depth of 1.5 metres against the western end. Its shape and sculptures make it attractive for photographers and for visitors strolling down from The Corso and round to Manly’s Shelly Beach.

From the 1850s
The affordable Manly Ferry helped Manly become the favourite resort of many Sydneysiders, who travelled from Redfern, Waterloo, Woolloomooloo and the Rocks with their picnic hampers and fishing tackle in search of amusement. After Bondi,

By the 1880s
Manly’s bushland reserve surrounding Cabbage Tree Bay’s Shelly Beach was an established picnicking and bathing place attracting up to 50 bathers between 6am and 7am. The name Fairy Bower reflected the fairy-like beauty of the bushland.

1920s
Professional and recreational fisherman kept their boats on Shelly Beach next to Fairy Bower Beach. Fish guts in the water attracted sharks prompting locals to create a shark-netted enclosure and support the construction of a rock pool.

1929
The Fairy Bower pool was included in the workplan by the Manly Council engineer.

1936
There were complaints about the disgraceful state of the Fairy Bower pool, which many people were using ‘since the shark tragedy at South Steyne’, only to find it empty of water for a fortnight and then filled with filth.

1940s
There were problems with flushing the pool.

1961
The Manly Fire Brigade was called in to fill the pool.

1997
As part of Manly Council’s public sculpture program, the two ceramic sculptures known as The Oceanides were installed on the pool’s seaward side. While some local swimmers disliked the sculptures when they were first installed, most pool patrons would now miss the sculptures if they weren’t there. The sculptures are slender, open and don’t block the view.

2002
The pool attracted around 12 morning regulars in the warmer months. Some of those regular pool patrons travelled there from as far as Five Dock, a suburb on the other side of Sydney Harbour and the Sydney Harbour Bridge.

2006
The small (around 30m on its longest side) roughly triangular Fairy Bower Pool was praised as one of Sydney’s top ‘plungeworthy’ pools in the Australian Traveller magazine.  Full-page images featuring the Fairy Bower Pool and its statues were used to promote the sale of three nearby residences.

2016
June storms damaged the much admired Oceanides sculpture on the seaward edge of the Fairy Bower Pool.
By October,  a crowdfunding campaign and Sydney’s Northern Beaches Council were each looking to raise half the cost of recreating the ceramic Oceanides in bronze.

This website is owned by All into Ocean Pools Inc,  a not-for-profit, volunteer community … END_OF_DOCUMENT_TOKEN_TO_BE_REPLACED