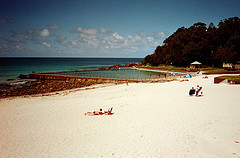 (Image from author’s own collection.)

The Forster Ocean Baths are set in a charming park at the southern end of Forster Beach at the base of Second Head. There is direct access to this ocean pool from the beach.

The Forster Ocean Baths is a rare case of a pay-to-use pool created with unemployment relief funds and the only ocean pool on the New South Wales coast operated  in tandem with a ‘dance casino’ (local use of the term ‘casino’ did not imply a facility for gambling).

1850s-1930s
Forster was only a village in 1850, but as Cape Hawke Harbour was important for coastal shipping, the harbour’s maintenance was a concern for the NSW Department of Public Works. Henry Haden, a Dredge Master with the NSW Department of Public Works, lived in a house on the corner of West and North Streets. He gave his name to Haden’s Pool, the pool developed in the 1930s to become the Forster Ocean Baths.

1935
Stroud Shire Council applied for an advance of 2,500 pounds from the New South Wales Unemployment Relief Council to construct ocean baths at Forster in accordance with a scheme outlined by the Shire Engineer and supported by the Forster Urban Committee.   By May, the grant was made and the NSW Public Works Department had approved the plans and estimates. Work began pending a special lease for the baths. Council made representations to the NSW Department of Labour and Industry about retaining Aboriginal Emergency Relief labour on the work. and later applied for a Public Reserve for the Forster Baths in lieu of a special lease.

The Forster Progress Association approved Council’s action to establish the baths ‘on such a magnificent scale’, but the project exceeded its original estimates and a further advance was sought. The cost of the building and pool was initially estimated as 5,734 pounds with a further 500 pounds for fittings. These estimates were later rounded up to give an estimated cost of  6,500 pounds.

Emergency relief workers for Stroud Shire Council did most of the work to create the baths and its associated building. Brick and terra-cotta work was done by contract labour. Plumbing, roof covering and electric lighting work was done by Council labour.   The pool was 280 feet by 180 feet with a natural floor and a maximum depth of eight foot six inches ‘giving ample room for Olympic swimming requirements’ and was flood-lit at night. The entrance building and dressing sheds were ‘a modern adaptation of the Spanish Mission style’ and offered club rooms, dressing accommodation, lockers, cubicles and showers. Costumes and towels could be hired. A diving board enhanced the pool, the concrete promenades enhanced the beach.

1936
The Hon. J. M. Dunningham MLA, the New South Wales Minister for Labour and Industry opened rhe Forster Ocean Baths  on 18 January. Admission to the Baths cost threepence for adults and a penny for children under 14. Season, monthly and weekly tickets were available. Council donated a trophy for the opening carnival.   Income from the Baths and café was estimated at 400 pounds with expenses of 200 pounds for the year. Between 20 December 1935 and 9 January 1936, over 7,000 people used the Baths producing revenue of 268 pounds and 13 shillings.

Shire Engineer F. G. D. Stone suggested Stroud Shire Council build a dance floor in response to requests from patrons of the Baths and the Forster Urban Committee. A dance casino (local use of the term ‘casino’ did not imply a facility for gambling) accommodating 450, offering dance nights during the summer holiday season and staging two or three balls each year was considered a big tourist attraction that could boost takings at the Baths Café.  Baths staff would control the Casino to minimise administrative costs.

Tenders were called for the construction of the Casino, at an estimated cost of 1,631 pounds borrowed by Council as an ordinary loan with the NSW Governor’s approval. Construction of the Casino began in September and it was ready for opening by December.   Between 23 October and 12 December 1936, the takings at the Baths amounted to 264 pounds. The Baths were becoming more popular each week and attracting hundreds of people to Forster. Stroud Shire Council was ‘laying the foundation for a tourist industry of inestimable value to the Shire and District’.

1937
Stroud Shire Council borrowed a further 300 pounds for the Casino with the NSW Governor’s approval. The Forster Urban Committee’s delegation to operate the Baths and café was extended to include the Casino, a hall which appears in the 1937 photos taken from the ocean side of the Baths looking back toward the land. With some 40,600 admissions to the Baths and Casino in a summer season, both enterprises were considered financially sound.

The ‘perfect floor, soft lighting and cool ocean breezes’ made dancing at the Casino a delight. Guest-houses like The Tudor private hotel and The Norfolk advertised their proximity to the Baths.   The Baths were also important to the district’s schools. The Forster Public School used the Baths and the more distant Taree High School arranged to use the Baths for its annual swimming carnival.

1938
Income from the efficiently run baths, café and casino complex was estimated as 385 pounds as the Ocean Baths and Casino were very well patronised during the 1938 summer holiday season.

1940
Forster was developing rapidly as a tourist resort and was considered ‘destined to be one of Australia’s leading watering places’. The Baths, Casino and camping ground provided by Stroud Shire Council had all been self-supporting since their inception and were now grouped together for reporting purposes as the ‘Shire Tourist Development Works’.   The manager for the baths/café/casino complex was paid a salary of 8 pounds per week, which ‘included assistance from his wife as needed’.

1941
In January large crowds visited the town from all parts of NSW, despite petrol rationing and the national outlook. While guest-houses were taxed to their limits, the number of campers was down.   By May 1941, returns from the Baths had decreased considerably due to the war and Mr Hitchens was given a free lease from May 1 until the Baths re-opened for the swimming season in October 1941, provided he painted, cleaned and renovated the premises and painted the camping reserve fence.

1942
In March, the Shire Engineer recommended closing the Baths and Casino owing to the lack of business ‘due to war conditions’. The Baths opened again for summer, but no permission was given for Sunday dances at the Casino.

1943
The Shire called tenders for the lease of the Baths and Casino. and granted the  lease to Mr J. F. Colliton of Forster for the period from October 1943 to October 1944.

1944
Mr J. F. Colliton’s lease of the Baths  was extended and he was granted a five-year lease that required him to arrange at least 26 dances with an orchestra each year and provided for increased rent once peace was achieved in the European and the Pacific theatres of war.   The Baths were cleaned, painted, handrails provided and the springboard repaired. A dance held at the Baths complex raised money for the Australian Comforts Fund.   The 1944 summer holidays brought Forster its largest crowd of campers in years ,

1945
The lease for the Baths and the Casino was adjusted for the increased rent due between VP Day (the day of celebration for Victory in the Pacific theatre of war) and September 30 1945.

1947
The Forster surf club was permitted to close the beach between the Ocean Baths and the breakwater to conduct the annual surf carnival on 28 December.

1950
The loan for construction of the Baths expired, giving Stroud Shire Council outright ownership of the Baths.

1951
The loan for construction of the Casino expired, giving Stroud Shire Council outright ownership of the Casino.

1980s to 1990s
The Baths building and the Casino buildings were used as a craft centre before being demolished.  2000 The Forster Tuncurry Mudcrabs Winter Swim Club based at the Ocean Baths swam from Pacific Palms to Forster to raise money for the Westpac Rescue Helicopter Service.

In 1988, the Ocean Baths became the start of the Pebbly Beach Bicentennial Walk, which leads south to One Mile Beach.

2001
On its way out after pumping sand from a settlement well at the pool, a 27-tonne contractor’s truck slid sideways in the wet conditions and damaged a retaining wall. A crane was hired to lift the truck out of the Baths.

Participants in the Coastcare Summer Festival walk to Bennetts Head met their guide at the Forster Beach Ocean Pool.

The Forster Ocean Baths to Bennetts Head walk was later targeted as a litter hotspot on Clean Up Australia Day.

2002
Problems with sand around the inlet valve of the pump, which replenishes the pool, left the pool empty and not available for use for two months, prompting many complaints about the lengthy loss of a popular swimming area. Lack of water in the pool meant the Mudcrabs Winter Swimming Club could only manage five Sundays of competition out  of the 18 it had scheduled.   A report to Great Lakes Council recommended construction of a retaining wall near the sediment well at the Ocean Baths, as part of a new process to assist the pool’s operation.

2003
Concerned citizens convened a public meeting on Sunday, June 22 at Forster surf club to protest about the condition of the Ocean Baths. The meeting began with a barbecue breakfast provided by the Mudcrabs. There were concerns about leaks, lack of water in the pool and a young visitor who had received a nasty oyster cut while playing at the Ocean Baths.

2005
While sand accumulating in the pump inlet hampered filing of the pool, natural turnover helped freshen the pool water. Council monitored the situation and scheduled repairs to the pool and pump and a full clean of the pool during May.

2007 to present
Motels in Forster and the Forster Beach Caravan Park & Marina still touted proximity to the rock pool as a visitor attraction. The Ocean Baths are promoted more as a means for young families to enjoy the pleasure of protected waters at the beach, than as a training venue comparable to the Great Lakes Aquatic Centre with its heated indoor pool.

This website is owned by All into Ocean Pools Inc,  a not-for-profit, volunteer community … END_OF_DOCUMENT_TOKEN_TO_BE_REPLACED