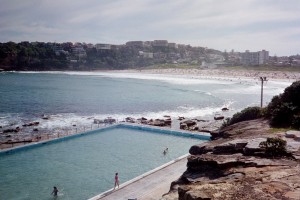 Freshwater Beach at the northern end of Harbord’s Freshwater Beach has an 8-lane, 50-metre seawater pool with a uniform shallow depth just over a metre, thick concrete walls to all four sides and no subsidiary children’s or wading pools. Constructed on an excavated rock platform and with tiered seating along the full length of the pool.

Middens, rock engravings and stone tools found on the headland testify to a long Aboriginal presence in the Harbord area around Freshwater Beach.

1884
The Manly Land Company subdivided the Freshwater Estate named after a small fresh water creek, which entered the sea at the northern end of the beach.

Early 1900s
Freshwater Beach was a workers’ holiday resort with calico tents, then whitewashed hessian and primitive houses available for use on weekends and holidays.

Warringah Shire was formed in 1906.

Isabel Letham rode a surfboard with world-famous surfer and swimmer Duke Kahanamoku at Freshwater in 1915.

1924
The Harbord Beach Improvement Committee (HBIC) asked Council to support the construction of a rock pool to the north of Freshwater Beach, just below McKillop Park and permission to hold surf carnivals to raise funds for it. Council agreed and arranged for the Shire engineer to design two pool options. The HBIC selected the longer pool option (70 feet by 50 feet).  The Freshwater surf club had also lobbied Council for the pool’s construction and raised most of the funds via concerts and carnivals. Many of the functions were held under the auspices of the Beach Improvement Committee. At a fundraising carnival attractions included performing dogs, a horse sideshow, merry-go-round, baby show and a Queen competition.]

1925
Shire President Parr opened the pool on 28 November 1925. The pool measured 33 yards (30.18 m) and was the first rock pool to be opened on the Northern Beaches. Mr W. H. Morgan had constructed the pool for a total cost of 472 pounds. In September, Mr R. Antill won a tender to build the lower path from the beach to the pool at a cost of 105 pounds. The HBIC again contributed half the funds.

1926
There were requests to improve the pool by concreting its bottom providing lighting.

1930s
Concreting of the pool bottom was completed.  The pool was used for swimming races by lifesavers, who competed for a trophy donated by H. C. Butterworth, the secretary of the Freshwater Surf Life Saving Club.

1949
Photos show Isabel Letham‘s swimming school in Freshwater rock pool. Around 1949, an ‘aquacade’ day at Freshwater pool involving a water ballet performance by the Freshwater Ladies Swimming Club saw crowds using the rock face next to the pool as a spectator seating.

1956
On 25 July 1956, a Trust for the swimming club was set up for the care, control and management of the pool, the clubhouse and McKillop Park. It comprised officials of the Men’s and Ladies Amateur Swimming Club and three ex-officio Council members. It was also authorised to hire out the clubhouse. The clubs were responsible for the internal maintenance of the clubhouse and the Council for any external repairs and painting.

1962
To comply with the standard for competition swimming pools, the Freshwater pool was extended from 33 to 55 yards at the western end.

1978
The pool was restored with a new pump, water outlets and walls.

1980
On 14 November 1980, the Harbord Beach, but not the surrounding suburb, was officially renamed Freshwater by the Geographical Names Board. The decision was supported by Warringah Council, backed by a petition signed by over 100 local residents.

1986
A statue of Duke Paoa Kahanamoku (donated by the Harbord Diggers Club) was set in a landscaped area in McKillop Park on the ridge. This statue is a significant cultural feature related to the pool and beach and a tourist attraction.

1998
Councillor Darren Jones proposed that Warringah Council establish a suitable park seat and an appropriate plaque in the vicinity of the Freshwater rock pool as a memorial to the contributions of the late Roy Longley to the coaching of junior swimming.

1999
Warringah Council began monitoring water quality in this pool and its other five rock pools.

A baptism took place at the pool in front of thousands of onlookers.

2001
The President of the Freshwater Amateur Swimming Club sought Council assistance to make the lane markings in the rock pool more distinct. Council responded that its service-level agreement for construction and maintenance of the rock pools only covered cleaning and minor pump maintenance and that no funds were available for line marking.

2002
The running route from the end of Freshwater Beach up around the rock pool and onto the Harbord Diggers Club was popular.

This website is owned by All into Ocean Pools Inc,  a not-for-profit, volunteer community … END_OF_DOCUMENT_TOKEN_TO_BE_REPLACED