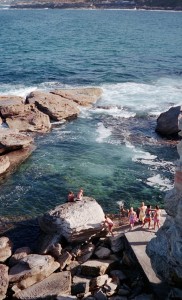 A cliff entrance gate titled ‘Baths’ on the north side of Coogee Bay leads to steps down to what is now just a bogey hole below Dolphin Point. This bathing place has attracted photographers since the 1870s. Memorable images of this pool and the remnants of the baths building have featured in photographic competitions held by Randwick Council.

Historical notes
There are suggestions that the Aboriginal tradition had been to set aside the northern end of Coogee beach for men’s activities and the southern end for women’s business.

1850s-1860s
Though there were fewer than 20 houses at Coogee in 1858, the natural rock pools at both ends of Coogee beach were popular swimming places from the 1850s and the early days of Randwick Council. To ensure that ‘the proprieties were properly observed’,  ladies bathed at the southern end of Coogee Beach and gentlemen at the northern end in a natural rock pool  known as the Bogey Hole.

1887
Opening of the Coogee Aquarium which offered a range of amusements, including an indoor swimming pool in a building with a distinctive large striped dome.

1896
After a new Act gave Councils the right to construct baths below the water line, Randwick Council began to discuss the building of men’s baths at an estimated cost of 1,000 pounds.

Early 1900s
A Crown reserve was created for baths on the north side of Coogee Bay. The first lease of the baths gazetted in 1902 under Section 30 of the Crown Lands Act of 1884 is to Randwick Council. Around that time, the pool was ‘more formally constructed’.

As F. W. Lloyd was the first proprietor, these baths became known as Lloyds Baths. The rules of Lloyds Baths not only banned dogs and swearing, but required bathers to wear trunks. Any child under 10 who could not swim had to be accompanied by an adult. The caretaker was sworn in as a special constable, so that he might have the full rights to deal with people breaking the rules. Lloyds Baths were advertised as ‘one of the few baths where the healthful past time of sun baking may be indulged in’.

1909
The Sands directory listed these baths at the northern end of Coogee Beach as the Randwick Municipal Baths.

1928
Opening of the Coogee pier, an English-style pier entertainment complex with a theatre, ballroom, restaurant and shops

1929
A massive shark net attached to the famed Coogee pier offered safe swimming day or night. The shark net’s 600-foot by 470-foot swimming enclosure could accommodate some 10,000 bathers at a time. This pay-to-swim facility with an admission charge of one penny attracted crowds of 30,000 a night for night surfing under floodlights. Coogee Beach was promoted as the safest surf beach in Australia and other coastal councils considered creating similar enclosures.

Oscar E. Giles opened the ‘Giles Hot Sea Baths and Swimming Pool’ on the site of the former Lloyds Baths as part of the November ‘Come to Coogee’ week celebrations that included the opening of the Coogee sharknet and the new surf sheds. Giles was a masseur and the Giles Baths offered a range of therapies ranging from massage and electricity treatments to hydrotherapy.

The baths offered service to both genders in separate facilities, but only men were permitted to use the rock pool and to bathe in the nude. Being a place where identities were left in the locker, the Giles Baths  served as a ‘genteel beat’ for Sydney’s gay men. It was probably more significant as a space where men of various backgrounds (racing and other sports, crime, police and politics)  could meet, mix and bond than as a fitness facility.

A building at the top of the cliff may have been constructed by Randwick Council, because the sublease from Council involved an existing building.

1947
Randwick Municipal Council transferred the lease of the men’s baths to O. E. Giles and sons. Council estimates for 1947 indicate the same expected income and expenditure as for 1946.

1960s
The Baths entry fee of 20 cents provided access to a locker and the chance to sunbake nude in the enclosed yard at the back of the bathhouse.

1974
Following severe storm damage, Giles Baths were condemned. The complex then included the famous hot sea baths (private cubicles in a bath house), a gymnasium and the rock pool below the gym.

1975
After a new 20-year lease was granted to O’Neil, Motta and Stevens, the baths complex was renovated, extended and re-opened as Giles Health Centre. Women could now attend the Giles Health Centre and use its rock pool and all its other facilities except the hot sea baths. Around 90% of the Giles patrons were men. Because of their proximity to Randwick racecourse, the hot sea baths were popular with jockeys needing to lose weight. Pool patrons included  sportsmen, criminals, police, members of the judiciary and gay men.

1994
The National Trust placed the Giles Baths pool on its heritage list and noted that the pool was in disrepair but in regular use.

1995
Randwick Council would only grant a 12-month extension to the existing lease of the Giles Health Centre.

1997
Randwick Council’s Plan of Management for Coogee recommended demolishing the baths building as it detracted from the visual quality of the headland.

1998
Due to the difficulty of getting Council to extend their lease, the operators closed the baths and abandoned the lease. The baths building in such a state of disrepair that although Randwick Council’s Local Environmental Plan (LEP) listed the Giles Baths as a heritage item, the NSW Minister for Lands consented to the demolition of the gym complex in the interests of public safety.

2000
Randwick City Council issued a development consent for demolition of the baths that included a condition requiring archival recording prior to demolition. The portico which once formed the entrance to the Giles Baths was preserved, when the gym complex was demolished for safety reasons.

2003
After apparitions of the Virgin Mary were reported near the Giles Baths site, the site became a place of pilgrimage, drawing crowds of people. Bright sunlight throwing shadows on the rock wall behind the fence above the Giles Baths may have produced an image interpreted as having religious significance.

As it  overlooks some of their favourite places such as the ocean, the Coogee Oval and Coogee’s  Beach Palace Hotel, Coogee’s northern headland was renamed Dolphin Point in memory of the six members of the Coogee Dolphins A Grade Rugby League team, who died in Indonesia on October 12 2002, when two bombs exploded in the Sari Club and Paddy’s Bar at Kuta Beach in Bali. A plaque listing the names of the 20 residents of Sydney’s Eastern suburbs who died in the Bali bombing was mounted on the portico, which once formed the entrance to the Giles Baths.

There was also a competition to design a Bali memorial sculpture for the headland as a permanent memorial to the 91 Australian citizens and residents who were among the hundreds of people killed or injured in the bombing. Sculptor Sasha Reid created the chosen design ‘Reclaiming Spirit’, consisting of three four-metre tall figures leaning on each other in evident strength and unity. The NSW Government and Randwick Council jointly funded this memorial, which was unveiled on October 12  2003, the first anniversary of the Bali Bomb blast.

2005
The Dolphin Point memorial has become a focal point of Coogee Beach, as well as a special place for the survivors of the Bali bombing and their families. A commemorative service on the third anniversary of the bombing included the unveiling of a new plaque on the portico, which once formed the entrance to the Giles Baths. This new plaque has a photo engraving of the bombing’s 20 Eastern Suburbs victims.

This website is owned by All into Ocean Pools Inc,  a not-for-profit, volunteer community … END_OF_DOCUMENT_TOKEN_TO_BE_REPLACED