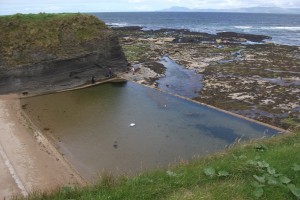 This bathing pool appeared in tourist guides and on postcards of Bundoran in the late-twentieth century.

2000 to present
Bundoran remained a popular tourist destination and gained recognition as one of the Ireland’s and Europe’s best surfing spots. 2011 tourist information gives the name of this pool as the Horse Pool (Thrupenny Pool).

This website is owned by All into Ocean Pools Inc,  a not-for-profit, volunteer community … END_OF_DOCUMENT_TOKEN_TO_BE_REPLACED