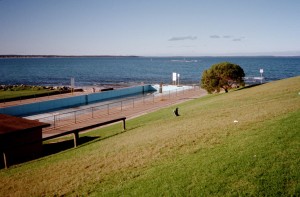 A seawater toddlers pool and 50-metre saltwater ‘pool on a hill’, rather than a classic ocean pool. This saltwater concrete pool from the 1960s is located in Huskisson’s Voyager Park on a hillside above the entry of Currambene Creek into Jervis Bay. The only fill-and-spill pool in the Shoalhaven. Occasional waves wash into this pool.

1860s
Huskisson was a boat-building town.

1911
The Royal Australian Navy was established.

1937
Huskisson had a shark-proof swimming enclosure in Jervis Bay.

1964
Over 80 sailors died when the aircraft carrier HMAS Melbourne collided with the destroyer HMAS Voyager. This episode is remembered as the Voyager disaster and commemorated by Huskisson’s Voyager Park.

1965
A 50-yard (48-metre) saltwater concrete pool was built with funds raised by the community’s National Fitness Committee with input from local, NSW and federal Governments.

2001
The Huskisson pool operated unsupervised until Shoalhaven City Council’s risk consultants warned in December 2001 against continuing to operate the pool without supervision. Council then fenced off the pool and erected signage giving emergency information to address insurers’ demands and reduce the risk of injury outside supervised hours.

2002
Shoalhaven City Council was investigating the maintenance cost and economic viability of its Huskisson and Ulladulla sea pools, after being forced to close them down for a week in February after Council ran out of funds to employ a lifeguard.   There was resident uproar. Hundreds of people attended a public meeting organised by local residents to discuss Council’s decision to close the pool due to insurance and public liability issues. The Council representative pointed out that as the pool was on Crown land, Council was in charge of what takes place on the site.

A ‘Save the Huskisson Pool’ working party asked Council to report back to it. Suggestions for keeping the pool open included transferring its ownership and the responsibility of insurance back to the people and erecting signs warning people to enter at their own risk. Residents felt the pool was ‘very much a focal point for the community where people come together’, ‘a nice place for families to gather, get some fish and chips and have a nice day out’. Children could walk to the pool and meet their mates.

Shoalhaven Council’s Aquatic and Leisure Manager said it was unlikely that the pools would close, given the strong attachment the community had for them.

2003
The Huskisson sea pool had a consistent four-star Beachwatch rating for cleanliness, meaning it was not contaminated and was safe to swim in.

Huskisson was a tourism, diving and residential centre where dolphin-watching had become a popular tourist activity.

This website is owned by All into Ocean Pools Inc,  a not-for-profit, volunteer community … END_OF_DOCUMENT_TOKEN_TO_BE_REPLACED