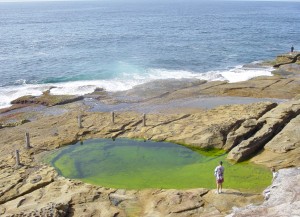 Steep steps to this tiny, rather private public pool are visible from the popular Eastern Beaches coastal walking track. Well-lit at night. Images of this pool are far more likely to be found in family albums than at exhibitions of artworks.

1965 to the early 1980s
Local residents who kept the pool clean found that the seaweed they took out was popular with rock fishers using this well-known spot for catching blackfish.

This website is owned by All into Ocean Pools Inc,  a not-for-profit, volunteer community … END_OF_DOCUMENT_TOKEN_TO_BE_REPLACED