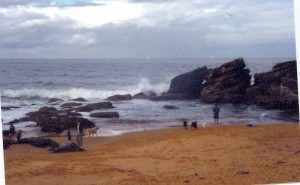 A combination ring-of-rocks and rock platform pool at the southern end of Putty Beach. This large ‘bogey hole’ in the rocks was known as a favourite and safe bathing place for children from the 1920s and is still in use.

Historical notes
1889-1910
The 1889 wreck of the Paddle Steamer Maitland and the 1909 wreck of the Narooma at Maitland Bay (named for the earlier shipwreck) drew attention to the Killcare area.   Travel into the NSW Central Coast improved after 1889 with the opening of the Hawkesbury Railway Bridge, the last link in the rail connection between the capital cities of South Australia, Victoria, New South Wales and Queensland.

The famous surfing beach at Putty Beach already had a rock bathing pool, a large ‘bogey hole’ in the rocks, that offered a favourite and safe bathing place for children.

1988
Gosford Council assessed the Putty Beach rock pool as having moderate usage and being a natural swimming hole augmented by rocks placed on the rock shelf, rather than a formally constructed rock pool. It recommended retention of the pool.

1997
Storms deposited a two-tonne boulder in this pool.

This website is owned by All into Ocean Pools Inc,  a not-for-profit, volunteer community … END_OF_DOCUMENT_TOKEN_TO_BE_REPLACED