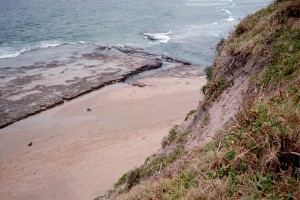 Children’s bathing pool at the foot of the steep cliff of Austinmer’s Brickyard Point, easily accessed from neighbouring beaches. Largely covered by sand back in 2003.

Historical notes
1800s
An 1880s saltworks, a sawmill and a brickyard were once located near the headland.

1927
The North Austinmer Progress Association recommended construction of the Baths.

In April, Bulli Shire Council considered an engineer’s report that recommended a  children’s bathing pool at North Austinmer Beach ‘designed to fill in any weather when the sea was sufficiently heavy to break over the cliff’, ‘be partly excavated and partly built on rocks under the Headland’.

The pool originally consisted of a concrete wall stretching almost 25 metres across the rock platform, blocking a modified basin in the rock shelf that provided a shared swimming hole.   Wollongong City Council Library holds a Broadhurst photograph of ‘Children’s baths at Austinmer’ around 1927.

The North Austinmer baths cost a little over 257 pounds and those costs were covered by combining over 110 pounds from a local Council rate at North Austinmer with 147 pounds from general Council funds. Rocks removed during construction are now associated with the boat ramp structure on the northern side of the headland.

1928
The NSW Lands Department granted Bulli Council a special lease for baths at North Austinmer at a fee of one pound per year. The North Austinmer Ratepayers Association appealed to Council to clean out the Baths.

1929
North Austinmer Progress Association requested Bulli Council get quotes for an additional door at the Baths.

1930s
Tourism peaked at Austinmer. This pool was often used by children.

Problems with seaweed and pollution from septic tanks later discouraged its use.

Late 1980s
A rock fall further reduced use of this pool.

2003
The pool’s concrete wall was almost completely disintegrated. But the pool was still in occasional use, despite containing a lot of sand and a lack of effective maintenance. It is now far less popular than the baths near the Austinmer surf club.

Little Austinmer Pool was one of four in the Illawarra to be considered of ‘high local heritage significance’ in a report to Wollongong Council by Stedinger Heritage and Archaeology.

This website is owned by All into Ocean Pools Inc,  a not-for-profit, volunteer community … END_OF_DOCUMENT_TOKEN_TO_BE_REPLACED