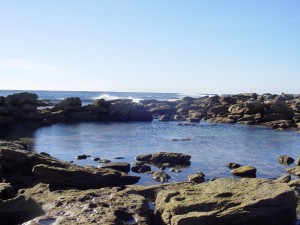 A ring-of-rocks pool constructed with beach rocks on the south tip of Little Bay in the grounds of what was the Prince Henry Hospital, ANZAC Parade, Little Bay.  ‘Little Bay and Baths’ appeared on an early twentieth-century postcard.

Historical notes
The beach and headland at Little Bay contain important Aboriginal sites, including middens dated prior to 1881.

1881
The Coast Hospital was established in response to an outbreak of smallpox in Sydney. This Hospital  was the first general hospital in NSW and the first post-convict era public hospital in NSW. It specialised in the treatment of infectious diseases as Little Bay, located some 14.5 kilometres (9 miles), southeast of the centre of Sydney, was remote enough to serve as a suitable quarantine site for Sydney victims of the plague, smallpox, typhoid, scarlet fever and leprosy. Other patients were taken direct to the Hospital from the Quarantine Station at North Head.

The hospital, set in spacious grounds near the sea, was a highly therapeutic place for patients, who were undernourished or lived in overcrowded areas with substandard housing, an unclean inadequate water supply and little or no sanitation.

1897
Nurses at the Coast Hospital were granted 52 days of leave a year, consisting of two days of leave a month and 28 days for annual leave. Nurses worked seven days a week and  often did not receive their designated two days off each month.

Early 1900s
Onsite recreation remained important for the hospital’s nurses, as the nearest public transport was the steam tram to the suburb of Botany, four miles away. Nurses paddled, swam and sunbaked at the beach at Little Bay, where a bathing shed was erected. The hospital had around 65 nurses and a total staff of around 80.

As sharks had been seen in Little Bay, Matron Jean McMaster forbade the nurses to swim in the Bay. Even so, nurses continued to swim there and often swam at night. There were no shark fatalities.

Matron McMaster requested better facilities for the nurses including a nurses’ home, a nurses’ sitting room and even hot water for the nurses’ bathroom, along with recreational facilities such as a fully equipped tennis court and a rock-enclosed pool in Little Bay. It was years before the rock pool was completed.

1905
By the time Alice Watson became Matron at the Coast Hospital, the rock pool in Little Bay had been constructed as a ‘safe’ swimming pool for nurses.

1917
Photos show nurses and convalescent patients in army uniforms on Little Bay Beach in front of the rock pool.

1920s
Photos show nurses on Little Bay Beach in swimming costumes and picnicking in front of the rock pool. Children played on the beach in the care of nurses.

1934
The Coast Hospital was renamed as the Prince Henry Hospital.

1950s
Nurses at the hospital still paddled and swam at the Little Bay Beach and in the rock pool. Prospective nurses were advised of the swimming from the hospital beach and other onsite recreational amenities provided free to the nursing staff, including competition-standard tennis courts, a 9-hole golf course, a library and film programs.

Late 1960s
The view across Little Bay from the pool changed when environmental artists Christo and Jeanne-Claude turned Little Bay into a sculpture, Wrapped Coast, Little Bay, One Million Square Feet, Sydney, by using a million square feet of erosion control fabric to wrap a section of the cliff-lined shore opposite the rock pool. A team of professional mountain climbers, labourers, students from the University of Sydney and East Sydney Technical College and Australian artists and teachers worked on the project. The coast remained wrapped for some weeks, before the site was returned to its original condition and the materials recycled.

1970s
Effluent from the Malabar sewage outfall to the north made the Little Bay beach and rock pool too polluted for swimming. Prince Henry Hospital nurses held dances, raffles and barbecues to raise money for an off-beach swimming pool built at no cost to the Hospital.

1990s
Construction of a deep-ocean outfall at Malabar ended pollution of the Little Bay Beach and rock pool. Local residents could walk to the pool across the Coast Hospital’s golf course.

2000
As the Prince Henry Hospital site was known to have significant heritage relating to both Aboriginal and European use of the site, Landcom (the NSW State Government’s land development agency) commissioned a due diligence report on associated heritage issues before purchasing the site. The report recommended establishment of a heritage precinct.

2002
Development of a Conservation Management Plan for the site.

2005
The rock pool was still useable. The Prince Henry Hospital site was redeveloped by the NSW government’s Landcom in partnership with the developer Stockland to provide 400 residential apartments and retail and commercial precincts. Eighty per cent of the site will remain in public ownership with remnant bushland, golf courses and heritage buildings to be retained. Landcom planned to invest more than $100 million into community facilities, restoration of nineteenth-century heritage buildings and other site activities.

This website is owned by All into Ocean Pools Inc,  a not-for-profit, volunteer community … END_OF_DOCUMENT_TOKEN_TO_BE_REPLACED