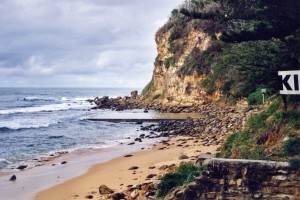 Sited at the southern end of MacMasters Beach, this shallow formed rock pool has rails, rather than the classic pool chains. Almost twinned with the Copacabana pool to the north, even though the two communities are distinct.

1890s
The southernmost surf beach on the Central Coast had been named MacMasters Beach, after a Scottish family that settled at a 600-acre property in the area in 1855.

1920
MacMasters Beach was still comparatively remote.  It had one holiday home until the MacMaster property was subdivided.

1928
There was a new direct Sydney-Newcastle main road. All trains north from Sydney stopped at Gosford and coastal steamers continued to land passengers and cargo at Gosford. By then MacMasters Beach had a park reserve and was rated as a ‘splendid site for picnicking’ or ‘erection of bungalows’, but ‘the recommended bathing place’ was in the lake, close to one part of the beach.

1959
Gosford Council operated a camping ground on the ocean front at MacMasters Beach.

1963
Largely at the instigation of George Waring, president of the Progress Association, residents built a pool at the southern end of the beach, so surf club members could teach children to swim.

1981
The pool was rebuilt and deepened by Council.

1988
Gosford Council assessed the MacMasters Beach rock pool as having moderate usage, a sheltered position and being suitable for young children to paddle around. It recommended retaining the pool, but providing signs stating the depth of the pool.

1991
After the pool began to leak badly, the community began writing to Council and agitating to have the deterioration of the pool addressed. As President of the MacMasters Beach Progress Association, George Waring’s daughter, Barbara Willis, was active in the campaign.

1993
MacMasters Beach was very much a residential and holiday-home area. It had few tourist facilities and its beach and pool were used mainly by locals and holiday-makers from Sydney.

2002
Gosford Council deepened the MacMasters Beach rock pool so lap swimmers  no longer scraped their fingers on the bottom.

This website is owned by All into Ocean Pools Inc,  a not-for-profit, volunteer community … END_OF_DOCUMENT_TOKEN_TO_BE_REPLACED