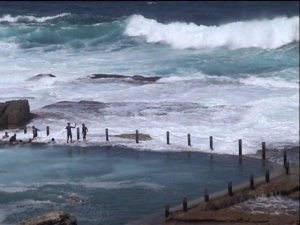 Unfenced pool north of Maroubra Beach at the base of the Jack Vanny Reserve, Marine Parade North, below the carpark and across the road from the Pool Café. This pool is cut into natural rock and the southern and eastern sides of the pool constructed of concrete. The pool has no pumping mechanism.

A beautiful setting with minimal man-made improvements, linked to other eastern suburbs pools by the Eastern Suburbs coastal walking track. Memorable images of this pool featured in photographic competitions held by Randwick Council.

1890s
The Hereward, a fully rigged clipper sailing for Newcastle, was wrecked at the northern end of Maroubra Bay in gale-force winds in 1898. The crew of 25 got ashore safely and the remains of this shipwreck became a tourist attraction.

The wreck of the Tekapo in 1899 also drew attention to Maroubra.

1909
While Coogee was busy with trams and tourist traffic, Maroubra was still a beautiful, isolated beach, still a few miles from the nearest tram-line.

1920s
Maroubra developed as a suburb once a tram-line operated to Maroubra Junction and Maroubra Beach. Homes in the still sparsely settled suburb of Maroubra had access to gas, electricity and town water. A beach boardwalk was constructed and the Maroubra Beach Hotel opened.   Car racing at the Maroubra Speedway was also a visitor attraction until 1928.

1932
The pool was constructed by Randwick Council as an Unemployment Relief project.

1940s
The pool was a popular playground for young children.

1960s
Navy divers removed the last traces of the Hereward.

1979
Pool improvements were sought to enable the weaker members of the community and children to use the pool. When seas were a little rougher than usual, young children and older folk were often swept against the rocks and at times even experienced swimmers found swimming in the pool was impossible.

There were proposals to extend the pool to a full 100 metres, creating a more sheltered swimming area and making it easier for social swimmers to continue to use part of the pool, while competitive club swimming events were held in the rest of the pool.

1983
After requests from residents and the Maroubra Seals Club, the Mayor of Randwick, John Ford, and the Council engineer inspected the pool and agreed the needed repairs included repairing the safety chain and drainage outlet, repairing the sea wall, paving and handrail, diverting fresh water seepage from the pool surrounds. They estimated the repairs to minimise injury to bathers would take two weeks.

1984
Residents were writing to newspapers complaining about the neglected Mahon Pool in a distressing state of disrepair, almost empty and unswimmable at its ‘worst in the last 18 years’.  The neglected state of the pool was seen as depriving adults and children of healthy exercise and enjoyment.

1985
Randwick Council decided earlier suggestions for extending the size of the pool were too costly, but people who had swum at Mahon pool for around 50 years thought it had never been in such poor condition.  They feared that Randwick Council intended to leave the recently levelled car park unpaved and felt better access was needed so older people ‘who felt the salt water was beneficial to them could use the pool in calmer weather’ and so ambulance officers could reach the pool easily in case of an emergency.

1988
The Mahon Pool was considered in deplorable condition as the extensive repairs to the pool’s concrete wall approved by Council in 1987 had been delayed for a year by rough seas.   Randwick Council was confronted with two separate petitions with a combined total of 313 signatures urging attention to the pool and its surrounds. Alderman Charles Mathews noted that the pool was in use all year and very popular with older and young people, who wanted to swim in sea water, but were concerned about the danger of the surf.

The Maroubra Seals proposed additions and alterations to the Mahon Pool change-rooms to the Randwick City Council. Council accept the Seals’ generous offer to undertake the work on the conditions that the work was not detrimental to the environment, complemented the attractive foreshore environment would not impose additional maintenance costs on Council.

1994
The National Trust classified the Mahon Pool and listed it on its heritage register.

1996
In the novel Get Rich Quick by Peter Doyle,  a body floated in the Mahon Pool. In real life, a fisherman at Mahon Pool had a heart attack and nearly drowned after a wave washed him off the rocks. His fishing partner and two other men kept him above water, while lifesavers were alerted. He was brought to the beach in a rescue patrol boat and flown to hospital in the Westpac lifesaver helicopter.

2000
As part of its State of the Environment (SOE) report, Randwick City Council reported on water monitoring in the Mahon Pool.

2002
Letters to Sydney’s Daily Telegraph complained that steps leading to the Mahon Pool were  ‘covered in thick moss’  which caused swimmers to slip and cut themselves on the rocks and demanded that Randwick Council act to keep it a ‘safe and enjoyable area’.

2003
Real estate pages, newsletters and advertisements for apartments and houses at Maroubra feature images of the Mahon Pool.

2005
The Sydney Swans AFL (Australian Football League) team were photographed exercising in the Mahon Pool, the day before they won the AFL Grand Final in Melbourne.

2006
Mahon Pool was praised as one of Sydney’s top ‘plungeworthy’ pools in the Australian Traveller magazine, which noted that the Sydney Swans AFL team regularly hold recovery session at this ‘impossible’ pool,  notable for a site that contrast with the sites of most other ocean baths by offering little protection from southwesterly winds. Swimmers in this pool learn to expect crashing waves and to swim elsewhere in stormy weathers and high seas.

This website is owned by All into Ocean Pools Inc,  a not-for-profit, volunteer community … END_OF_DOCUMENT_TOKEN_TO_BE_REPLACED