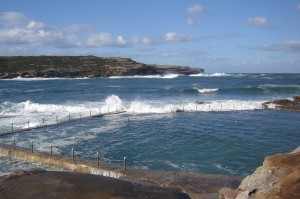 Malabar Pool is in Long Bay, below the Randwick Golf Club. The current pool is smaller than the pool shown on this site in early twentieth-century postcards.

Historical notes
Early colonial period
Once a swampy area with a stream flowing to the beach and a camping place for Aboriginal people, who created paths down to Long Bay, this area became part of the land set aside to support colonial clergy and teachers.

1890s
A fine rock pool formed with boulders existed on the south side of Long Bay, near the site of the present golf club.

Early 1900s
A small fishing village had grown up on Long Bay, which had become a popular picnic and weekend camping spot for city dwellers. People from inner Sydney suburbs like Paddington would come to the area to stay in weekenders.

The State Reformatory for Women opened at Long Bay.

Around 1911
Randwick Council was proposing to build dressing-sheds and an enclosed swimming baths for ladies at Long Bay. The beach was popular with adults and children because of its beautifully clean sand and water and because it was believed to be seldom visited by sharks.

Land at Long Bay used for musketry practice was set aside for Defence purposes.

An ocean outfall constructed at Malabar in 1916 carried waste from the Homebush abattoir and other waste into the ocean. The waste plume attracted sharks and seabirds.

1930s
The 4,512-tonne Burns Philp ship Malabar was stranded in shallow water off the north headland on its 1931 maiden voyage. Over 30,000 sightseers came to visit the wreck and the area around Long Bay became known as Malabar

There was unemployment camp at Malabar in the  Depression years.

1967
When the ANZAC rifle range at Liverpool closed, numerous rifle clubs transferred to Long Bay. The ANZAC Rifle Range at Malabar was on Commonwealth-owned land.

The Department of Army renamed the Long Bay rifle range as the ANZAC rifle range in 1973.

Sewage from Malabar sustained vast numbers of the now-endangered wandering albatross. People still saw and smelled the sewage plume going all the way out to the horizon. The bay and the rock pool were eventually declared off-limits to bathers due to pollution from the Malabar sewer outfall and the surf club that had patrolled the beach closed down. The historic 150-metre sea pool fell into disrepair.

The NSW Department of Health requested that Randwick Council erect signs to warn people that the water was polluted from the Malabar sewer outfall.

1985
The principal of St Andrew’s Primary School at Malabar asked Randwick Council to plan restoration of the Malabar Pool, as the inground Heffron Park Pool (now known as the Des Renford Aquatic Centre) at Maroubra was so booked out, that local children had no learn-to-swim venue. Randwick aldermen insisted that the area would not be fit for swimming for decades after the planned upgrade of the ocean outfall.

Early 1990s
Construction of the Deep Water Sewer Outfall at Malabar so improved the water quality in its vicinity, that Long Bay was once more fit for bathing. The outfall emptied 4.2 kilometres offshore from Boora Point.

1991
Stormwater and rain, rather than sewage and industrial waste were the major sources of pollution in the Bay.

1993
Malabar was back on the surfing circuit, but the Malabar rock pool had been long neglected. Six local schools requested the pool’s re-opening so that they could use it for swimming carnivals. State MP Bob Carr promised a $ for $ subsidy for the pool if his party won government. The incoming Randwick Mayor, Cr Charles Matthews, was also seeking contributions from the Water Board and local industry.

1994
The Malabar Beach and Foreshore Plan of Management recommended restoring the rock pool but improving its safety by reducing its size and deepening and flattening the pool. It also recommended providing a stroller ramp from the carpark to the pool, an outdoor shower and small toilet block and commencing work in 1994 financial year and continuing into the following year. Residents were keen to have the rock pool re-opened and water quality further improved.

1997
A plaque at the Malabar Pool testifies to the re-opening of the restored ocean pool in March by the Premier of NSW and the Mayor of Randwick and that funding for restoration was provided by Randwick City Council, Sydney Water and the coastal management program of the NSW  Department of Land and Water Conservation.

1999
The waters of Malabar’s beach and the ocean pool were crystal-clear.

2000
As part of its State of the Environment (SOE) report, Randwick City Council reported on water monitoring in the Malabar pool.

2002
Dumping of oil and paint prompted a $30,000 clean-up involving Randwick City Council, the NSW EPA and the Fire Brigade’s hazardous materials team. The EPA said that while the paint had damaged seagrasses in the pool, most of the spill was contained in the pool, so there was unlikely to be any long-term environmental damage. Randwick Council offered a reward for information leading to a successful prosecution and considered installing floodlights and video surveillance equipment.

2005
There were demands that the Commonwealth Government hand the Malabar headland over to the people of NSW as open space.

2006
There are still occasional complaints from residents and beachgoers about foul odours coming from the sewage treatment plant at Malabar, the largest of the ten coastal sewage plants operated by Sydney Water.

This website is owned by All into Ocean Pools Inc,  a not-for-profit, volunteer community … END_OF_DOCUMENT_TOKEN_TO_BE_REPLACED