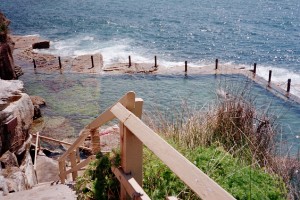 This beautiful 20-metre ocean pool set on the rock platform between the Coogee surf club on Coogee Beach and Wylies Baths is still reserved solely for use by women and children. It’s well-screened from the Grant Reserve above the pool. A clubhouse and a small sunbaking area are located above the pool.

Historical notes
There are suggestions that the Aboriginal tradition had been to set aside the northern end of Coogee beach for men’s activities and the southern end for women’s business. The pool site may have been a traditional bathing place for Aboriginal women and was used as a women’s bathing area after the 1820s.

1876
Randwick Council received complaints about men wilfully lingering near the women’s baths, even though these baths were not operated by the Council.

1886
The baths were apparently more formally constructed with women’s changing rooms, which made greater usage of the baths possible.

1901
Randwick Council’s lease of the baths site expired and the NSW Minister for Lands called tenders for improvements. The Minister believed that the charges required by Council from private operators were too high and he was unwilling to extend the Council lease on the pool. Entry charges to the baths were a penny, with a further penny for hire of a towel and costume. After Council argued that it had spent 300 pounds on improvement to the baths, it gained a 10-year extension of their lease at five pounds per annum.

1912
Mina Wylie trained in this pool before swimming her way to a silver medal in the 1912 Olympics, the first Olympics with swimming events for women.

1922
The McIver family had created the baths in their present form.

1946
Randwick Council decided to apply to the Minister for Lands to have the bath available to the public for mixed bathing. That decision was overturned after objections from the proprietors of neighbouring Wylies Baths, pointing out the potential damage to business at their mixed bathing pool, and  the Mother Superior of the Brigidine Convent at Randwick, stating that the nuns at her convent, any country nuns vacationing there and the 100 boarders at the Brigidine School would not be able to visit the baths, if they were opened for mixed bathing.

1947
Randwick Council estimates indicated an expected income of 20 pounds from the women’s pool. The Coogee-Randwick Ratepayers Association complained to Council that McIvers Baths were an eyesore and a disgrace to the community and urged they be demolished or put in proper repair. In June, Robert McIver explained to the Council Works Committee that  owing to the bad conditions of steps, he had been unable to open the baths the previous season except to school groups. He also said that he could not carry on any longer under the present conditions.

1972
Council was discussing plans to build a solid fence around the pool ‘not only for sensible reasons’ but also to deter ‘perverts and peek-a boos’.

1977
The women’s baths were renovated.

1980s
After vandals burned down the Randwick and Coogee Ladies Amateur Swimming Clubhouse, Randwick City Council agreed to rebuild the clubhouse. The Randwick and Coogee Ladies Amateur Swimming Clubhouse presented a prize to each youngster who learnt to swim (sometimes after only a two-week period) at its free Saturday morning swimming classes. Boys under seven could learn to swim there, but then had to move on to use other pools.  Continued closure of the women’s pool deprived Coogee kids of swimming lessons and made races impossible. The pool was leaking badly and only contained water at high tide. Heavy rocks in the pool needed to be removed and minor repairs undertaken. Council said repairs were delayed until sea and tide conditions permitted them to be carried out in working hours.

1990s
When  Randwick Council’s lease from Department of Lands expired,  Council requested a five-year renewal of the lease.

1993
Mrs Doris Hyde of the Randwick and Coogee Ladies Amateur Swimming Club commended the pool’s lesbian patrons as ‘the nicest girls’ and the ‘ones who’ll put the fellows out’.

1994
The National Trust classified this pool and listed it on its heritage register.

The Randwick and Coogee Ladies Amateur Swimming Club learn-to-swim classes now took boys up to age 12. The club raised funds for cancer research at the Prince of Wales hospital, worked closely with the Coogee surf club and Wylies Baths, as well as the Coogee RSL.

A man complained that he had been sitting on the foreshore near the pool, when several women sunbaking at the pool call him a ‘deviant’, asked him to leave, and threatened to call the police if he didn’t. Mrs Doris Hyde of the Randwick and Coogee Ladies Amateur Swimming Club denied the baths were ‘a lesbian lair’ and said she had never seen anything untoward there.

After a Coogee man, Leon Wolk, complained to the NSW Anti-Discrimination Board that he was barred from the baths on account of his sex, the Anti-Discrimination Board wrote to Randwick Council seeking information about the baths. Randwick City Council stated there had been no complaints about the baths and that it was prepared to take legal action to keep McIver’s ladies baths free of men.

The Randwick and Coogee Ladies Amateur Swimming Club claimed it did not have funds to construct change rooms for both sexes, which made it impractical to admit men, except to cheer on their children at swimming carnivals.  The women’s pool was traditionally used by older women, women with disabilities, nuns and others who preferred privacy as well as pregnant women and older people with arthritis who enjoyed the pool’s private sunbaking area and didn’t want to go to the beach, indulge in mixed bathing, or be bothered by men. Thursday was traditionally married ladies day. Girls schools held water safety classes at the baths, which were popular amongst the Islamic community. The club’s free lessons had helped Islamic women and children gain confidence in the water and some Islamic women contended that it was the only place their faith permitted them to swim.

The medical profession argued that Coogee’s women’s baths were the only place where women who had suffered disfiguring operations could comfortably bathe.   Despite claiming it was the only safe sea pool in the area during high tides and rough weather, Leon Wolk lost the case.

1995
The NSW  Minister for Local Government, Mr E. Pickering, granted the baths an exemption to an exemption from the NSW Anti-Discrimination Act.

2003
Randwick City Council allocated $85,000 for Stage 1 landscaping at the women’s pool, thought to be Australia’s only sea pool still reserved solely for use by women and children.

2004
The pool closed while landscaping was carried out.

2006
The 20 metre long McIvers Baths with its steep stairs was praised as one of Sydney’s top ‘plungeworthy’ pools in the Australian Traveller magazine. The pool remains popular with a wide variety of women.

Young Muslim women from Auburn prefer to sunbake in areas not visible from the cliff. There are still complaints that men ‘who should know better’ oggle women and photograph them from an area on the Coastal walkway despite Randwick Council installing fencing and relocating street furniture to make it difficult to see baths inside the women’s baths.

This website is owned by All into Ocean Pools Inc,  a not-for-profit, volunteer community … END_OF_DOCUMENT_TOKEN_TO_BE_REPLACED