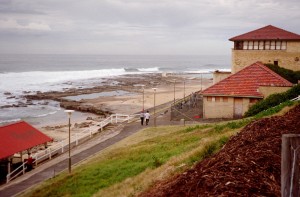 Merewether’s older ocean pool is located at ‘The Ladies’, the part of Merewether Beach once reserved for ladies. This older pool  seems tiny alongside Merewether’s newer larger pool complex on the same rock platform. Swimming 100 yards meant doing four laps of these baths (140 feet by 60 feet with a depth of 18 to 72 inches).

Historical notes
1840s
Merewether was once part of the Burwood estate belonging to James Mitchell, who commenced coal-mining there in the 1840s.

From the 1870s to 1907
Men bathed nude in ‘The Gulf’ at Merewether, often diving into the Gulf at its sea end and allowing the waves to carry them to the shore end. Ladies and children had a safer bathing spot, known as ‘the Ladies’.   Picnickers negotiating the Gulf en route to the Glenrock Lagoon either turned a blind eye or made embarrassed retreats when confronted by the nude male bathers. Even so, many ladies considered this route less risky than walking the old mining tunnels.

1902
Following serious outbreak of typhoid in Newcastle, an efficient sewerage system was recommended for the city. Despite protests from Merewether Council and residents that ‘everything thrown out to sea comes back on the beach’ and suggestions that the sewage should be treated in a septic tank before being discharged on the beach, it was decided  to discharge all the district’s raw sewage into the Gulf at Merewether. The NSW Minister for Works argued that ‘if a nuisance arose, the Government would have to abate it’. The NSW Public Works Department promised to make 600 pounds available from the government to Merewether Council ‘for the making of a bath’ as soon as it could be proved there would be no pollution.

1907
The practice of shark fishing at the mouth of The Gulf using meat and bones as bait ‘to attract the monsters’ may have contributed to a non-fatal shark attack at Merewether Beach. Bathing in The Gulf ended in 1907, when it became the outfall for the first sewerage scheme (now a stormwater outlet).

‘Mixed’ bathing had not yet become the fashion in Newcastle.

1908
The first house in Merewether was connected to the new sewage scheme. The crude waste being discharged at Merewether was ‘a distinct annoyance’ to everyone living within a reasonable distance of the beach outfall, almost unbearable until the subsequent installation of ‘better ventilating appliances’.

The men’s swimming club organised a 1908 surf carnival with ‘proceedings in aid of erecting Ladies and Gentlemen’s baths’. Despite the excitement of a shark attack and the rescue of three swimmers, a display by the rocket brigade, the presence of the Cooks Hill Public School band and a regimental band, a fancy dress competition, a three-legged race, a tug of war (where the Brewers defeated the Harbours and Rivers team), a ‘cigar and button race’, a ‘single ladies’ race and an exhibition of water-polo, ‘lack of method’ caused many spectators to leave the carnival.

1913
The NSW Public Works Department investigated complaints about odour and pollution from the sewer outfall at Merewether.

1924
A working bee cleared rocks from the Ladies Pool and Merewether Council was ‘asked to co-operate’ on a pound-for-pound basis.

1926
Merewether Council was informed tha the NSW government’s estimates included 600 pounds to fund construction of the Merewether baths. As the trebling of the population of Newcastle between 1900 and 1926 had overloaded the sewage system,  the Merewether beach still had a pollution problem.

1927
The Merewether surf lifesaving club (which had developed from the Merewether men’s swimming club) appointed three members to approach the NSW Public Works Department and argue against the Council’s proposed baths site (thought to be where the new baths are located). Though neither consulted, nor asked to participate in choosing the site, the surf club declared the only ‘feasible, practical’ site was ‘the spot known as the Ladies Bathing Pool’.

1928
Baths near Merewether’s promenade and located adjacent to ‘The Ladies’  were completed by January. The 600 pounds provided by the NSW government covered the total cost of the baths to Merewether Council.

Considered ‘a blessing to many of the younger generation as well as to adults’, these concrete baths were 140 feet long and 60 feet wide and had a depth ranging from 18 to 72 inches. The Merewether Surf club held the first swimming races at the baths in December.

Merewether’s aldermen remained concerned at the amount of sewage that washed into the baths but admitted that ‘what was more natural than that refuse floating on the top of the waves should be thrown over into the baths’. Convinced that the pollution problem would exist as long as the sewer outfall was at the Gulf, Council decided not to spend any more money constructing a higher sea wall to limit the pollution of the baths.

1929
A beach cleaner was employed full-time to clean sewage pollution from the Gulf outlet. Every Tuesday night, the Merewether pool was lit for night-time surf club races  that attracted crowds of up to 300 people.

1928
Work began on a sewage amplification scheme to eliminate the pollution problems at Merewether.

Early 1930s
During the Depression, relief workers cleaned out the baths and the Merewether surf club continued to hold swimming races at the baths.  ’Despite the depression in the district’, the Merewether Ladies Amateur Swimming Club’s clubhouse was opened in mid-March 1931 by  Merewether’s Mayor Alderman Rowland. The Ladies Club contributed half the shed’s total cost of 202 pounds. A ‘popular girl’ competition had raised over 70 pounds, while other fundraising efforts included dances and a fancy-dress concert.

Lots of local girls joined and there was always a good attendance at the club race nights. The clubhouse had a piano, chairs and tables and hosted bridge and mah-jong lessons. The ladies swimming club worked closely with the Merewether surf club, forming joint committees to arrange socials, concerts and dances. Even before the clubhouse was built, the Club Captain had taught ‘dancing exercises’ on the promenade.

At a time when women were not admitted to full membership of mainstream surf lifesaving movement, the ladies club also formed a non-competitive ‘march past’ team, that competed at surf carnivals in the blue and gold colours of the first 30th Battalion formed in 1915, when men from Merewether enlisted for service in World War I.

Promenade and steps were completed in 1932.   Council granted the Merewether Ladies Swimming Club permission to enclose the beach area around the vicinity of the baths for  a 1934 carnival.

1935
The amplification scheme intended to treat all Newcastle’s sewage, screen out solids and discharge only ‘the liquefied portion’ into the ocean and so eliminate pollution at Merewether Beach came into operation.

1972
The Merewether Mackerels winter swimming club formed and asked the Town Clerk for permission to use the old baths ‘until such time as the use of the Merewether Ocean Baths could be granted’. Newcastle Council agreed to clean out the old pool and indicated that the main baths would remain open for the 1973 season. The Merewether Mackerels ended their first season with around 65 members, many from local surf clubs. Sunday morning swims usually finished back at the surf club for hot soup and ‘a drop of sustenance’ .

This website is owned by All into Ocean Pools Inc,  a not-for-profit, volunteer community … END_OF_DOCUMENT_TOKEN_TO_BE_REPLACED