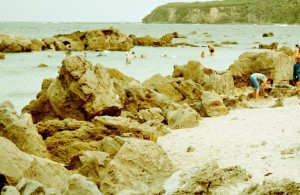 (This image taken in January 2003. Author’s own collection.)

This Bogey Hole is a large circular tidal ring-of-rocks pool located at Collers Beach and accessed via Golf and Riversdale Avenue at Mollymook. Inadvertently enlarged and improved by silica-mining activities.

Historical notes
Before 1900
The Mollymook Bogey Hole may long have been used by Aboriginal people for hundreds or thousands of years as a swimming place, as a fish trap and as a place to dive for lobsters and shellfish. Strategic placement of rocks could supplement a natural enclosure and form channels to direct fish into waiting nets or spears.

Around 1900
Collers Beach, generously made accessible to the public by the Coller family, was a very popular retreat and picnic area for local people, partly because of the safe swimming at the Bogey Hole.

1914
Collers Beach remained the favourite picnic place and many locals learned to swim at the Bogey Hole. even after the Collers Beach property was closed to horses and vehicles, due to visitors’ failures to close gates.

1917
Investigations by the Illawarra brick company revealed that silica from the headland at Mollymook known as Flint Point ‘gave promise of yielding a refractory brick equal in quality to the world’s best silica brick’.

Around 1918
Flint Point was mined for silica. Rocks that were almost pure silica were transported to Ulladulla, then shipped to Port Kembla and Newcastle to be crushed and made into refractory bricks to line the furnaces of the steelworks. The mining of silica meant Flint Point itself virtually disappeared. There was subsidence in the cliff faces along the northern side of the headland and big rocks were removed from the Bogey Hole. When the silica quarrying increased the size of the Bogey Hole, people were quick to take advantage of it as a good place to swim, even though pieces of broken quartzite on the pool’s sandy bottom were often razor-sharp and very dangerous.

After the 1920s
Silica mining became uneconomical. When the quarry men and their shacks disappeared, fishermen, swimmers and picnickers came back in increasing numbers. Communal Boxing Day and New Year’s Day picnics at the Bogey Hole continued. After a young local man drowned, possibly taken by a shark, local people acquired a real fear of entering the surf and swimming in the open sea.

1933
Children were still learning to swim in the Bogey Hole.

2006
Mollymook’s Bogey Hole was considered a visitor attraction and an enhancement to the value to nearby properties.

This website is owned by All into Ocean Pools Inc,  a not-for-profit, volunteer community … END_OF_DOCUMENT_TOKEN_TO_BE_REPLACED