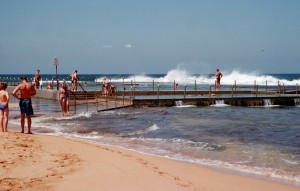 Located off Surfview Road at the northern end of the beach. The 25-metre Mona Vale Rock Pool is located on a rock outcrop right in the middle of the beach on the rockshelf between Bongin Bongin Bay and Mona Vale Beach. It’s Pay & Display parking here. Lights for night swimming or fishing.
This pool is a popular subject for photographers.

Historical notes
1800-1899
The area takes its present name from a farm located close to the beach in the 1820s.

Mona Vale was only sparsely populated in 1922 when the Mona Vale surf club was established on land donated by its first president, Olympic swimmer Fred Lane.

Calling of tenders for making baths in Brock’s rocks at Mona Vale, where a natural rock pool already existed had to be  delayed until a strip of sea-front land had been set aside as a reserve.

Early 1930s
Advertisements stated that ‘Dee Why, Collaroy, Mona Vale, Newport and Avalon’ each have ‘large swimming pools excavated in the rocks, which are the joy of the younger generation’. The natural rock pool was enlarged as part of the Unemployment Relief scheme. Cutting the pool deeper into the rock shelf allowed good entry and exit of water, while the wide rock shelf protected the pool from wave action.

1934
The Ladies Amateur Swimming Clubs from Mona Vale  and Dee Why competed for the Warringah Shire Cup.  During World War II A large number of troops camped in the area and used the baths.

1991
The surrounds of the wading pool were recapped.

2001
As part of the lead-up to the 2001 National Winter Swimming Championship in the indoor pool at the Warringah Aquatic Centre, the host winter swimming club, the Pittwater Pirates, staged a ‘Dash for Cash’ event at the Mona Vale rock pool that attracted 120 swimmers.

This website is owned by All into Ocean Pools Inc,  a not-for-profit, volunteer community … END_OF_DOCUMENT_TOKEN_TO_BE_REPLACED