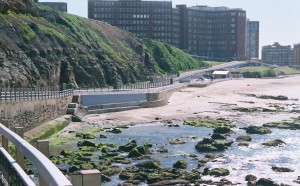 Not a formal pool, but  a location at the southern end of Newcastle Beach (near the Newcastle Hospital site) once reserved as a bathing place for women and children.

From 1850 to 1879
Male and female bathers had to use separate areas of Newcastle’s beaches or bathe at separate times. Agitation for public sea baths grew, despite the existence of the Bogey Hole.

1890s
The Corporation of the City of Newcastle was one of 12 in the district, and had only a small income base and was running into debt. Income came from land and lighting rates, property rents, fines in the Police Court, the removal of night soil, licensing of horse-drawn vehicles and charges made at the indoor Corporation Baths, the outdoor Bogey Hole and the Ladies Baths (a swimming enclosure on Newcastle Beach).

1907
A tourist guide noted that ‘mixed’ bathing had not yet become the fashion’ in Newcastle, so a section of the Newcastle Beach remained fenced off so ‘ladies who like the surf may gratify their taste’. For ‘those who prefer the quieter waters where swimming is possible, a ‘large pool protected on its seaward side by boulders has been provided in this reserved space’. The Ladies Bathing Place had dressing accommodation and freshwater shower baths and an attendant from whom bathing costumes could be hired.

1911
As the Ladies Bathing Enclosure was far from ideal as a learn-to-swim venue, the Bogey Hole was  ‘practically the only place in Newcastle where swimming can be taught, making it desirable that women and girls have access to it’. More than 100 ladies petitioned Newcastle council to reserve more hours at the Bogey Hole for use by women and children on weekdays and on Saturdays. Despite concerns that it might have to provide a female attendant at the Bogey Hole on those days, the Newcastle Council approved ladies use of the Bogey Hole on two afternoons a week.

1912
Mixed bathing at surf beaches was increasingly accepted as a safety measure.

1913
Newcastle Council made little  effort to provide women and girls with dressing accommodation at the incomplete Newcastle Ocean Baths and wast surprised that many women and girls came to use those baths on the first day the  baths were open to the public.  The new baths were a valued alternative to both the Ladies Bathing Enclosure and the Bogey Hole.

This website is owned by All into Ocean Pools Inc,  a not-for-profit, volunteer community … END_OF_DOCUMENT_TOKEN_TO_BE_REPLACED