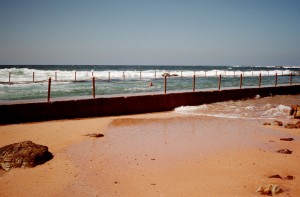 Warringah Council built three rock pools at Newport. Two pools were sited at the northern end and one at the southern end of the beach. All were constructed with concrete and small rocks from the surroundings, but their exposed positions and their lack of adequate anchorage to the rock shelf led to their deterioration After these three earlier ocean baths at Newport washed away, residents wanted another rock pool to be constructed.

Newport Surf club was founded in 1911. Around 70% of Newport ratepayers were non-resident and many of the houses were weekenders.

1924
The ocean  side of Newport was still all farms.

A public meeting in October resulted in a petition to the Shire Council requesting that another pool be built, arguing that ‘the site of the proposed pool is unique and generally considered to be one of the finest on the coast’. The Council had some apprehension about embarking on the pool construction process, as the new site was on private land and a number of land-owners in Calvert Parade were less than enthusiastic.

1925
In December, a tender for the pool’s construction was let to Mr T. Birmingham for 535 pounds and 12 shillings. During the following decades, there were many complaints to Council about rock slides blocking access and ‘the dilapidated state of the swimming pool’.   Early 1930s Advertisements stated that ‘Dee Why, Collaroy, Mona Vale, Newport and Avalon’ each have ‘large swimming pools excavated in the rocks, which are the joy of the younger generation’.  During World War II , Newport was the first beach north of Manly with no barbed-wire entanglements, so servicemen went there to swim.

1928
There were 150 residents close to the beach, but Newport was still seen as a weekend resort. While some of the houses were occupied during the week, the others were owned mainly by people from the Sydney suburbs of Manly and Mosman.

1962
A complaint to Council insisted that  not only were ‘the walls of the pool are not high enough to prevent sharks, driftwood from entering the pool’, but the ‘seaweed has to be removed’.

1966
With 300 members participating in its weekly races, the Newport Amateur Swimming Club succeeded in persuading Council to enlarge the pool.  Council constructed a toilet block and change sheds at the Newport pool. The $15,554 contract was let to Alex. T. Dobble Pty Ltd with a construction time of 18 weeks. A light for night swimming was also erected on the cliff top overlooking the pool.

1970s
When the baths were used for school sports, teachers trusted they wouldn’t lose students on a big day.

1984
Council upgraded the pool and reconstructed the western wall of the baths.

1985
Around 30 dolphins spend two days surfing and feeding just off the pool.  2000  Heavy seas washed away the sand at the southern end of the beach near the pool, exposing a big outcrop of rocks. These created such a dangerous obstacle course for people trying to access the pool that some regulars abandoned their early morning swims, while others had falls. Eventually, a regular swimmer in his nineties took his spade to the beach and moved enough the rocks to create a safe track to the pool.

2006
The online National Public Toilet Map included the facilities near the rock baths, it labelled as the Newport Beach Pool.

This website is owned by All into Ocean Pools Inc,  a not-for-profit, volunteer community … END_OF_DOCUMENT_TOKEN_TO_BE_REPLACED